Items related to The Payoff: Why Wall Street Always Wins 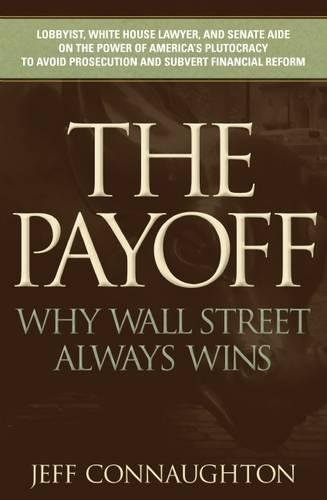 Lobbyist, White House Lawyer, and Senate Aide on the Power of America’s Plutocracy to Avoid Prosecution and Subvert Financial Reform

Beginning in January 2009, THE PAYOFF lays bare Washington’s culture of power and plutocracy. It’s the story of the twenty-month struggle by Senator Ted Kaufman and Jeff Connaughton, his chief of staff, to hold Wall Street executives accountable for securities fraud, to stop stock manipulation by high-frequency traders, and to break up too-big-to-fail megabanks.

This book takes us inside their dogged crusade against institutional inertia and industry influence as they encounter an outright reluctance by the Obama administration, the Justice Department, and the Securities and Exchange Commission to treat Wall Street crimes with the gravity they deserve. On financial reforms, Connaughton criticizes Democrats for relying on the very Wall Street technocrats who had failed to prevent the crisis and Republicans for staunchly opposing real reforms primarily to enjoy a golden opportunity to siphon fundraising dollars from the Wall Street executives who had raised millions to elect Barack Obama president.

Connaughton, a former lawyer in the Clinton White House, illuminates the pivotal moments and key decisions in the fight for financial reform that have gone largely unreported. His arch, nonpartisan account chronicles the reasons why Wall Street’s worst offenses were left unpunished, and why it’s likely that the 2008 debacle will happen again.

In January 2009, Ted Kaufman, longtime aide to Vice President Joe Biden, was appointed to fill Biden’s seat in the U.S. Senate. Former Biden staffer and top DC lobbyist Jeff Connaughton joined Kaufman as his chief of staff. Frustrated with the systemic failures that led to a devastating financial crisis, together they led the charge in challenging both Congress and the Obama administration to rein in the excesses of Wall Street.

THE PAYOFF examines a culture of power elites in our nation’s capital that is slouching toward plutocracy, an alarming tale of reformers with the best of intentions running headlong into institutional failure and influence-peddling politics. It’s the story of a twenty-month struggle to hold Wall Street executives accountable for securities fraud, to stop stock manipulation by high-frequency traders, and to break up too-big-to-fail megabanks. In this book, we experience a U.S. senator’s vigorous crusade against Wall Street’s irresponsible risk-taking that destabilized the American economy. Through times of triumph and disheartening defeats, rarely witnessed from within our country’s legislative body, we encounter inertia, behind-the-scenes maneuvering, and outright reluctance by the Obama administration, the Justice Department, and the Securities and Exchange Commission to treat Wall Street crimes with the urgency they deserve. Even Robert Khuzami, director of the SEC’s enforcement division, when asked about federal judges rebuking the SEC for levying paltry fines, said to Kaufman: I’m not losing any sleep over it.” Meanwhile, the Republican Party remains staunchly opposed to significant financial reform, primarily to wring fundraising dollars from the same Wall Street players who’d raised millions to elect Barack Obama president.

Connaughton, a former lawyer in the Clinton White House, illuminates the pivotal moments and key decisions in the fight for financial reform that have gone largely unreported. His take-no-prisoners, nonpartisan account chronicles the reasons why Wall Street’s worst offenses were left unpunished, why Obama’s Financial Fraud Enforcement Task Force was merely window dressing, why our stock markets are broken, and why it’s likely the 2008 Wall Street driven debacle will happen again.

Finally, in an incisive self-critique, Connaughton reviews the arc of his own career from an idealistic Biden acolyte to a money-driven Professional Democrat to Washington critic and commentator and spells out why all Americans should stand united against crony capitalism.

I'm going to address briefly four questions, all of which go to the integrity and competitiveness of our capital markets. First, was there fraud at the heart of the financial crisis? Second, has the law enforcement response so far achieved effective levels of deterrence against financial fraud? Third, are federal law enforcement agencies sufficiently capable of detecting fraud and manipulation, particularly in markets that are increasingly complex? And finally, should Wall Street itself care about all this? In short, my answers would be yes, no, no, and yes.”
Jeff Connaughton, Financial Crisis and Financial Crimes”
New York Federal Reserve, Nov. 2, 2010

For me, what is deplorable is not the Justice Department’s failure to bring charges, but its failure to be adequately dedicated and organized either to make the cases or reach a fully informed judgment that no case could be made. Given the inadequate effort, as President Obama virtually admitted in his 2012 State of the Union address when he announced the formation of yet another task force (which remains an ill-staffed farce), we’ll never know what an appropriate effort would have produced. And that has resulted in the appearance of a double standard. If the explanation for the inadequate effort is corruption (the administration could not afford to anger Wall Street contributors), the revolving door, or a belief that the health of the financial industry is more important than legal accountability, then we have an actual double standard. I don’t know the explanation, but in terms of faith in our institutions, it may not matter whether the double standard is real or apparent. That double standard has torn the social and moral fabric of our country in a way I find to be unforgivable.
from the Epilogue

5. THE PAYOFF: WHY WALL STREET ALWA

6. THE PAYOFF: WHY WALL STREET ALWA