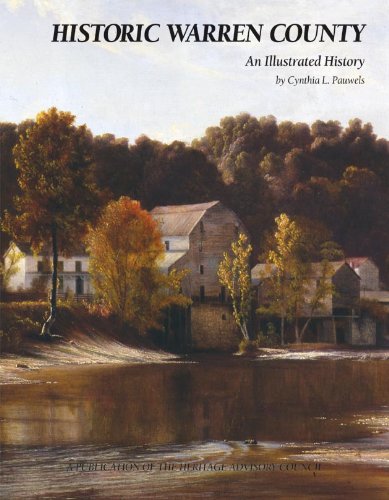 An illustrated history of Warren County, Ohio, paired with histories of the local companies.

More than 200 years of history awaits the visitor to Historic Warren County. Heritage, culture, entertainment, industry – we have it all! The project book will highlight all these wonderful features and more which make this corner of southwest Ohio a destination for families, businesses and visitors alike. Starting in 1797, the newly-opened Northwest Territory provided a refuge for Quaker settlers who arrived in what is now Waynesville after fleeing their home state of South Carolina in protest against the scourge of slavery. The Friends form a still-active community in this diverse county which was named for the first American soldier killed at the Battle of Bunker Hill, General Joseph Warren. Numerous stops along the Underground Railroad dot the gently rolling countryside; quaint villages line the curving rural lanes and historic buildings nestle gracefully alongside modern technology in a thriving county which remains the fastest growing in Ohio. The spirit of freedom which led those brave pioneers is alive and well Historic Warren County.

Cynthia L. Pauwels brings a wealth of experience in writing and graphic arts, and love of history to Historic Warren County. Her credits include numerous articles for diverse publications including the Dayton Daily News, Rossford Record Journal and The Ohio Michigan Line magazine, several short stories, and a variety of business marketing materials and newsletters. Cyndi (note to editor: or ‘Ms. Pauwels,’ as you prefer) holds a bachelor of arts in humanities from Antioch University McGregor in Yellow Springs, Ohio, where she is pursing graduate studies in creative writing and philosophy. She gratefully shares her chaotic life with her husband of 30 years, George; two grown children, Megan and Stephen; a hyperactive dog, and a 17-year-old cat who will outlive them all.

Further note: my bachelor’s degree will be conferred June 29, 2008, and my grad school application is pending. No problems anticipated with either, but just in the interest of fair disclosure!

Book Description HPN Books, 2009. Hardcover. Condition: Good. Connecting readers with great books since 1972. Used books may not include companion materials, some shelf wear, may contain highlighting/notes, may not include cdrom or access codes. Customer service is our top priority!. Seller Inventory # S_276675030

Book Description Historical Publishing Network. Hardcover. Condition: As New. An apparently unread copy in perfect condition. Dust cover is intact; pages are clean and are not marred by notes or folds of any kind. At ThriftBooks, our motto is: Read More, Spend Less. Seller Inventory # G1935377094I2N00

Book Description Historical Publishing Network, San Antonio, Texas, 2009. Hard Cover. Condition: Very Good. No Jacket. First Edition. CD4 - A first edition (stated) hardcover book in very good condition that has some bumped corners, some scattered light scratches, light discoloration and shelf wear with no dust jacket. 11.25"x9", 80 pages. Satisfaction Guaranteed. Warren County is a county in the U.S. state of Ohio. Its county seat is Lebanon.[3] The county was created on May 1, 1803 from Hamilton County; it is named for Dr. Joseph Warren, a hero of the Revolution who sent Paul Revere and the overlooked William Dawes on their famous rides and who died at the Battle of Bunker Hill. Warren County is part of the Cincinnati, OH-KY-IN Metropolitan Statistical Area. Seller Inventory # ec52488

Book Description HPN Books, 2009. Condition: Good. A+ Customer service! Satisfaction Guaranteed! Book is in Used-Good condition. Pages and cover are clean and intact. Used items may not include supplementary materials such as CDs or access codes. May show signs of minor shelf wear and contain limited notes and highlighting. Seller Inventory # 1935377094-2-4