Items related to Precarious: Stories of Love, Sex, and Misunderstanding 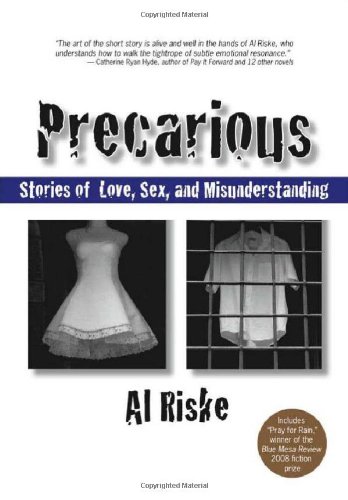 The stories in PRECARIOUS are about doing the right thing and regretting it. About men who are still boys. About making bets and dancing naked.

They play out in rain-soaked Seattle and drought-stricken California. In the front seat of Mom's Malibu and a vacation cabin on Cape Cod. On a tiny island and in a desert filled with light and heat and sand that slips through your fingers like friendships you once had.

In these fifteen stories you will meet a boy trying to make it through that summer between the end of high school and the start of something else. A girl so alive you can feel her heartbeat from half a mile away. A woman attracted to a man with muscles, because it makes her feel safe ... until it doesn't.  A man who can only imagine what it's like to sleep with many different women, but that's OK -- he has a good imagination.

In prose that is by turns spare and lyrical, the stories of Precarious capture the feeling of late summer. A never-ending game of Kick the Can. All sense of time lost among the stars.

The stories in Precarious are all very different yet they're all about the same thing. Women and men. An endlessly fascinating topic.
The great thing about short stories is they can make you feel what someone else felt. The better the story, the more subtle and nuanced the feelings. Anyway, that's what I look for as a reader. The surprise as a writer is how you can make yourself feel things you never felt before or never knew you felt.

Writers are like actors. We get to play a lot of different roles, try out a range of personalities and live lives very different from our own.I wrote these stories to find out what would happen to the characters and how things would turn out for them. I wrote them because I felt like I had some things to say that I couldn't say any other way.

"Riske's characters brim with the fears, desires, and idiosyncracies of real, complex human beings. In the collision of spiritual and sexual concerns that plague them, we find a truth that makes us believers in the power of his fiction."
- Laura Matter, Blue Mesa Review