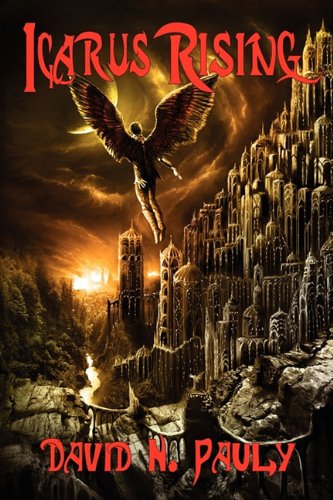 In Nostraterra, the wars between the allied races of Elves, Men and Dwarves have ended; the Dark Lord Magnar has been overthrown. The Great Peace is suddenly shattered when Alfrahil, Crown Prince of Eldora is nearly assassinated. The King suspects his younger son Daerahil's lust for the throne has taken a dark and deadly turn, ignoring all evidence to the contrary. Is Daerahil the architect of this terrible plot or is he an unwitting pawn on someone else's chessboard? In the forests of the Elves, it is whispered that Elven Prince Ferox plans to seize the lands of Nostraterra for himself. Aiding Daerahil and his allies, Ferox hopes to fuel a conflagration which will consume Eldora, leaving the lands of Nostraterra his for the taking. Meanwhile, the Dwarves are wracked by deep divisions as the Flame Priests vie for supremacy, desiring to usurp all Dwarven power into their religion of segregation and hatred for other races. Secular Dwarf lords fight against the growing powers of the priests, trying to hold their kingdoms intact; preventing war from breaking out anew. In their distant refuge of Platonia, several pacifist Gracies are called from their pastoral home, embarking upon a great journey to aid the Magi, Oracle to the races. Transporting the last survivors of an ancient sentient race to the Magi's Emerald Vale, the Gracies are waylaid by craven foes who seek the magic of these last ephemeral beings. Will they succeed, or will the magic of life itself be forever lost? Who wants to tear the world asunder, feasting upon the ruins of the kingdom of Men? Will the world descend into chaos, or will it be saved from the ambitious and craven who threaten all? The answers lie within which begins your journey through the magical lands of Nostraterra.

Book Description Black Rose Writing, 2011. Condition: Good. A+ Customer service! Satisfaction Guaranteed! Book is in Used-Good condition. Pages and cover are clean and intact. Used items may not include supplementary materials such as CDs or access codes. May show signs of minor shelf wear and contain limited notes and highlighting. Seller Inventory # 1935605992-2-4