Items related to The International Legacy of Lehendakari Jose A. Agirre's... 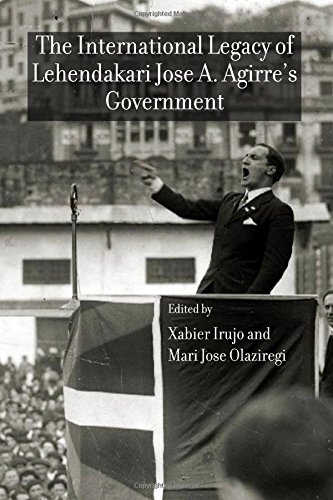 This book, the result of an extensive international gathering of scholars from many different disciplines and countries, explores the fascinating life of Jose Antonio Agirre (1904–1960), the first lehendakari or president of the Basque Country. A charismatic figure that in many ways transcended the bitter political divisions of the age he lived through, Agirre’s legacy serves as a timely reminder of how maintaining one’s political, social, and cultural convictions need not necessarily serve as a barrier when it comes to promoting dialogue, cooperation, and diplomacy. A Basque nationalist but also an internationalist and strong advocate of an integrated Europe, Agirre’s biography reads as a testament to the mid-twentieth century experience of war and exile, and the chapters herein explore his life in both Europe and the Americas against the backdrop of the Spanish Civil War, World War II, and the coming of the Cold War.

Buy Used
Condition: As New
Used book that is in almost brand-new... Learn more about this copy