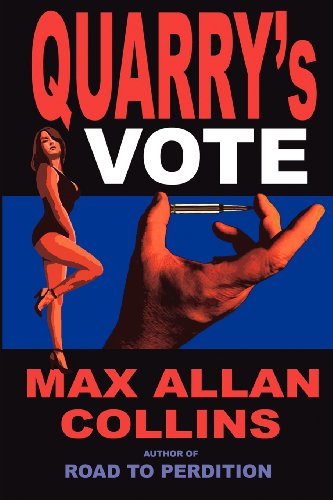 When retired hitman Quarry turns down a million bucks to murder a presidential candidate, he becomes a "loose end" that the conspirators need to tie off. With his peaceful life in ruins, Quarry launches his own campaign--for vengeance. A new edition, with afterword by the author, of the fifth book in Max Allan Collins's cult classic series. They don't come harder-boiled than Quarry. "Violent and volatile and packed with sexuality . . . classic pulp fiction" (USA Today).

Max Allan Collins, noted both for his Nate Heller detective series and as creator of Road to Perdition (basis for the Oscar-winning Tom Hanks film), has been writing about killer-for-hire Quarry for more than thirty years. Says Booklist: "Collins remains the quintessential modern-day pulp writer."

Given the bleak tone of Collins's Quarry series, it's not a spoiler to reveal that the tranquility the hitman enjoys at the beginning of his suspenseful fifth outing, first published in 1987 as Primary Target, is short-lived. As he relates in the opening line, his "big mistake was allowing happiness to creep in." Quarry has retired from the murder business and is married to Linda, who reentered his life years after their initial one-night stand. They run a combination hotel, convenience store, gas station, and restaurant in Paradise Lake, Wis. At 39, with money not a worry and a baby on the way, Quarry has become soft, but he's pulled back into his old life by a stranger who knows all about his violent past. The man offers Quarry a million dollars to take out radical presidential candidate Preston Freed, a proposition the assassin refuses. But soon after, Linda and her visiting brother are murdered, sending Quarry on a mission of revenge. Collins (Quarry's Cut) again succeeds in making a stone-cold killer sympathetic and in devising plausible plot twists. (Mar.)\n

Book Description U.S.A.: Perfect Crime Books, 2010. Soft cover. Condition: New. Special Edition. 2010. Trade Paperback. First Printing, thus. (SIGNED BY THE AUTHOR ON THE TITLE PAGE.) BRAND NEW UNREAD COPY. This is An Original Edition--one of the first Printed. RECEIVED PERSONALLY FROM THE AUTHOR, WHO STATED TO ME "The QUARRY reprints from Perfect Crime that you have are all from a limited print run that went to me and to reviewers and maybe a few indie bookstores. After those were gone, those reprints became POD." Originally published as "Primary Target", this reprint edition also contains a new afterward written by the author. Mint in full color wraps. Signed by Author(s). Seller Inventory # ABE-14034186628