Items related to Steve McQueen, King of Cool: Tales of a Lurid Life

Steve McQueen, King of Cool: Tales of a Lurid Life 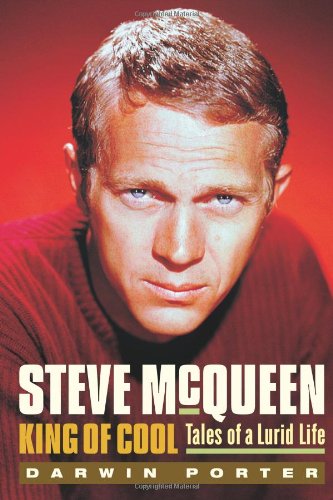 Beginning June 1, 2003, the early life of Hollywood’s most famous movie star will be taken off the dusty shelf of "dark and unknown" and brought to the forefront. In a new and untold till now biography, "The Secret Life of Humphrey Bogart," Darwin Porter delves deep into Bogart’s salacious, formative years on Broadway and in early Hollywood when ‘Talkies’ were the rage.

Compiled after extensive interviews with eyewitnesses, some conducted as early as the 1930s, Porter’s latest book uncovers scandals within the entertainment industry in the 1920s and 1930s, when publicists from the movie studios deliberately and studiously twisted and suppressed inconvenient details about the lives of emerging stars.

Porter’s book exposes the true and tantalizing details of ‘Bogie’s’ big game seductions, including the likes of Joan Crawford, Tallulah Bankhead, Barbara Stanwyck and Bette Davis. Not sparing any of the steamy and sometimes seamy details of Bogart’s well noted life, this book shatters the myth of the strong and silent trenchcoat and sheds light on the daunting odds and exotic temptations Bogart faced during his struggle for survival in early Hollywood.

Porter’s research examines the price Bogart paid for compulsive brushes with gangsters, prostitutes and blackmailers, details of which were aggressively suppressed as the leading man’s career blossomed, then collapsed, then blossomed again during the 1920s and 30s. Also exposed is Bogart’s thankless role as errand boy and courier for Howard Hughes, soon after Bogart’s botched seduction of Hughes’ mistress, Billie Dove. In addition to ‘locating’ male escorts for Howard Hughes, one of Bogart’s tasks involved escorting Jean Harlow from Los Angeles to a clinic in Tijuana for an abortion of a child believed to have been fathered by Hughes himself.

Bogart became deeply involved in these and in other indiscretions which, if they’d been publicized by Louella Parsons (whom Bogart is said to have cajoled and coerced with a one-night sexual affair) would have destroyed his Hollywood career. "The Secret Life of Humphrey Bogart" will divulge a number of unknown and ignominious facts about the life of early Hollywood’s leading man. Readers will discover the true "behind the scenes" saga of Broadway during the Jazz age and in Hollywood of the early Talkies, and get drawn into the discussion of what is ‘too much news’ or ‘not enough news.’ They'll also be given insights into the people who got to decide.

Humphrey Bogart was born in 1899 into the prosperous but dysfunctional union of a New York City doctor and a successful commercial artist and Suffragette. Both of his parents socialized with Theodore Dreiser and a young Franklin D. Roosevelt, and both of them struggled with addictions to morphine and later, shrinking incomes. Never particularly gifted at either sports or at academics, Bogart was eventually expelled from Phillips Academy in Andover, Massachussetts.

Precocious and an avid reader, Bogart reached his sexual adulthood in prep school with older women, then expanded his horizons to include dalliances with Hollywood players who often developed into legends themselves. His well-documented trysts included dalliances with, among others, Tallulah Bankhead (whose drug abuse of choice at the time was cocaine), Marlene Dietrich, Bette Davis, Bebe Daniels, Glenda Farrell, (who he met during her tenure as one of the working girls in a prominent brothel), and--longest running of them all--Joan Blondell. During the years covered in this biography, Bogart married twice, in both cases, to talented and beautiful actresses, one of whom happened to be Helen Menken, a highly politicized and very prominent lesbian who did a great deal to advance his career.

Bogart eventually died of throat cancer in 1957, never wanting to discuss the details of his early, pre-Bacall, pre-Casablanca, pre-African Queen days in Hollywood. but since Darwin Porter brings a treasure trove of insight to Bogart's until-now largely unexamined early years, we can only wait, breathlessly, for a sequel.

1. Steve McQueen, King of Cool: Tales of a Lurid Life