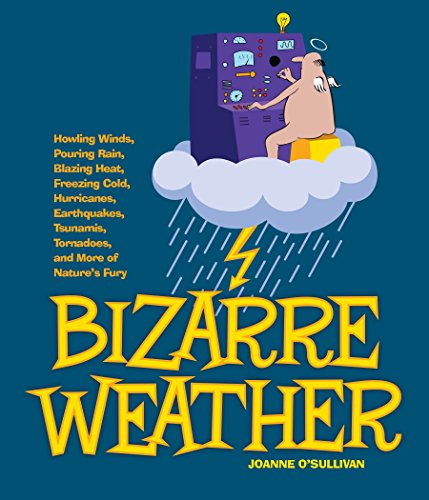 This is weather beyond your wildest imagination—yet it’s all true: showers of worms from the sky, watermelon snow, gory storms, and other freakish and fun phenomena! These stories are anything but ordinary, and they will leave you stunned, horrified, amazed, and sometimes even amused at the incredible things nature can do. Gathered from historic records, present-day news reports and research studies, and spanning the globe from the Sahara to the tundra to the USA, they reveal just how volatile and bizarre weather can be.

Find out about supersized hailstones as big as bowling balls; fish raining from the sky; the never-ending lightning that has become a UNESCO National Heritage Site; and fog so thick it killed hundreds of people in a single day. And if that isn’t strange enough for you, there are terrible typhoons and tsunamis, tornadoes that have carried people into the air, temperatures that soared over 49 degrees in two minutes, and even cyclones that have raised ships buried for over a century. Scientists can explain how and why some of these things happen—but other events remain a mystery.

Joanne O'Sullivan is the author of 101 PLACES YOU GOTTA SEE BEFORE YOU'RE 12!, 101 THINGS YOU GOTTA DO BEFORE YOU'RE 12, and 101 WAYS YOU CAN HELP SAVE THE PLANET BEFORE YOU'RE 12, as well as many titles for adults including, BOOK OF LEGAL STUFF and BOOK OF SUPERSTITIOUS STUFF for the Imagine Publishing'. She and her children spend many happy hours exploring the wonders of the natural world.

On a clear day in April 2011, a group of kids met up to play soccer after school at Galashiels Academy in Scotland. They had just started warming up when they heard strange thudding sounds. Alerted by the unusual noise, their gym teacher looked around and noticed that there were worms writhing around on the ground near the students. Then the kids started to cover their heads. The worms were falling from the sky—more and more of them with each passing second. The incident lasted just a few minutes, but when it was over, hundreds of worms had dropped to the playing field and onto the tennis court, according to the teacher, who collected some of the worms as samples. The playing field wasn’t close to any buildings on campus, eliminating the possibility that the group had fallen victim to a prank. That left just one possibility: this soccer team had just experienced some bizarre weather.
Horses are carried aloft by tornadoes and set down unharmed. Hailstones as big as elephants plummet to the earth. There are whirling columns of fire, clouds created by airplanes, and places where lightning rarely stops flashing. Into the furthest reaches of recorded history, there are stories of strange and unbelievable weather, which was at the time chalked up to witchcraft, devilry, and the end of the world. (When the sky turned pitch black in the middle of the day, surely the end was near!). Our ancestors had no way of knowing that those dark days were just the result of ash particles from raging forest fires or volcanoes mixed with a thick fog.
As technology and forecasting have improved, scientists have been able to offer explanations for some of the most puzzling mysteries in weather history. On the other hand, there are phenomena that still can’t quite be explained. And technology can help us uncover even more  baffling phenomena, such as high-atmosphere, colored lightning and cloud systems that rain in unison.
There’s nothing like the weather to remind us all that we live in a world that’s not always predictable and rational. No matter how much we believe we have conquered nature, it will still have a lot of surprises in store for us. Even in the twenty-first century, a dust storm can shut down a major port city, black rain can pour from the sky, and cities in warm climates can be buried in ice. And, yes, schoolchildren can be pelted with worms.
Forget what you think you know about the weather. The stories in this book will shock, surprise, amuse, horrify, and puzzle you. Collected from historic records, present-day news stories, and research studies, these accounts of bizarre weather capture the volatile and changeable nature of everyone’s favorite topic. While you may start out a skeptic, you’ll find that bizarre weather does happen, even if hasn’t happened to you—yet . Somewhere in the world, at this moment, the rain may be red, the wind vicious, and the temperatures unbearable. Expect the unexpected, and keep your eyes peeled for airborne invertebrates.