Items related to The Year We Disappeared

Cylin Busby The Year We Disappeared

The Year We Disappeared 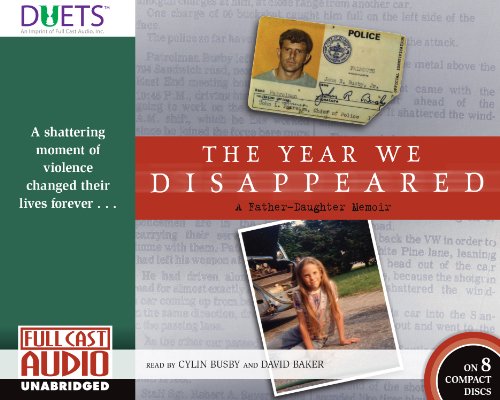 A peaceful summer night is shattered by gunfire as an unseen assailant tries to murder police officer John Busby. Though horribly wounded, Busby survives. But the perpetrator remains at large, meaning neither Busby, nor his wife, nor their three children are safe. In separate chapters John and his daughter Cylin, who was nine at the time, recount the story of that year. John writes graphically, and movingly, of his wounds, his pain, his multiple surgeries, and his rage. Cylin tells their story from a child s point of view, sharing vivid memories of confusion, loss of friends, and the struggle to build a new life. Together, father and daughter craft an unforgettable picture of fear, of police corruption, and of a malignant thug who no one dares to cross. Yet their story is also one of redemption and recovery, and ultimately of hope and healing.

CYLIN BUSBY is the author of several fiction and nonfiction books for young readers. She is the former senior editor of Teen magazine, and has written numerous magazine articles. She lives in Los Angeles with her husband and young son. Visit her on the web at cylinbusby.com

Gr 9 Up-The lives of John Busby, a police officer, and his family were shattered on the evening of August 31, 1979 when he was shot in his car on the way to work on Cape Cod. While he survived the horrific encounter, he had to undergo years of reconstructive surgeries. John believed that the shooter was hired by a prominent individual in the community who was dissatisfied because two members of his family had been arrested. During the investigation, the Busby family was under 24-hour surveillance and, finally, they moved away and went into hiding. This memoir (Bloomsbury, 2008), written by Cylin and John Busby, chronicles this horrific event and its aftermath and is told in alternating chapters by David Baker and John's daughter, Cylin, who was nine-years-old at the time of the shooting. By experiencing the story through the eyes of the victim and his daughter, listeners get an accurate picture of their ordeal. This true-rime story will be a good supplement for high school and public library collections.-Elizabeth L. Kenyon, Merrillville High School, INα(c) Copyright 2011. Library Journals LLC, a wholly owned subsidiary of Media Source, Inc. No redistribution permitted.