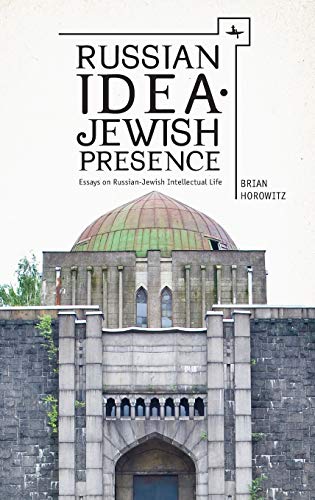 In Russian Idea―Jewish Presence, Professor Brian Horowitz follows the career tracks of Jewish intellectuals who, having fallen in love with Russian culture, were unceremoniously repulsed. Horowitz relays the paradoxes of a synthetic Jewish and Russian self-consciousness in order to correct critics who have always considered Russians and Jews as polar opposites, enemies, and incompatible. In fact, the best Russian-Jewish intellectuals―Semyon Dubnov, Maxim Vinaver, Mikhail Gershenzon, and a number of Zionist writers and thinkers―were actually inspired by Russian culture and attempted to develop a sui generis Jewish creativity in three languages on Russian soil.

Brian Horowitz (PhD University of California, Berkeley) is the Sizeler Family Chair Professor in Jewish Studies at Tulane University. He is the author of such books as Jewish Philanthropy and Enlightenment in Late-Tsarist Russia (2009) and Empire Jews (2009). He has won numerous awards, including a fellowship at the Frankel Center at the University of Michigan, an Alexander Von Humboldt grant, a Fulbright, an IREX grant, and a Yad Hanadiv grant to study with Ezra Mendelsohn and the late Jonathan Frankel at the Hebrew University.

“If there is still a need for an antidote to the Fiddler on the Roof image of Russian Jewry, then this is it. Horowitz opens up the vibrant world of thought and literary creativity among Russian Jews of the pre-Soviet period to the contemporary reader. These fascinating figures were sophisticated thinkers and writers who grappled creatively with many of the issues that occupy many today―but in ways that are often unexpected. This Russian Jewish intellectual milieu is a relatively unexplored territory for many, but Horowitz is a knowledgeable and reliable guide and leads the readers to a very stimulating and thought-provoking intellectual experience.” (Shaul Stampfer, The Hebrew University of Jerusalem)

“Immersed in the traditions of the Russian Intelligentsia, Horowitz’s writings span across the fields of philosophy, literature, and history. In clear and penetrating prose, Professor Horowitz demonstrates once again the importance of liberal ideas among Russian Jewish intellectuals in the revolutionary era.” (Jeffrey Veidlinger, Professor of History and Judaic Studies, University of Michigan)

“This fascinating and wide-ranging collection of essays provides a remarkable insight into the preoccupations of Jews in the Tsarist Empire at the turn of the nineteenth century and of the broader intellectual climate of the time. It is essential reading for all those interested in how Jews reacted to the worsening political climate in Russia in the decades before the Bolshevik revolution.” (Antony Polonsky, Albert Abramson Professor of Holocaust Studies at the United States Holocaust Memorial Museum and Brandeis University)

“The narratives found in the book celebrate Jewish culture but in doing so also question issues of social and political assimilation and ultimately of the role of Russian Jews in a changing society and world. Russian Idea―Jewish Presence is effective for graduate level as well as for undergraduate students. In that alternate perspectives are a focus of all scholars, the insightful discussions offered by this book are ones that scholars of various fields should include in their own personal libraries. It is precisely the diverse range of narratives that help explain philosophical differences in a way that is accessible to those not familiar with this era of history, nor with the various philosophical discourses of those times.” (Rosalind Latiner Raby, California State University at Northridge The Russian Review, July 2014 (Vol. 73, No. 3))