Items related to The Casebook of Jonas P. Jonas and Other Mysteries

The Casebook of Jonas P. Jonas and Other Mysteries 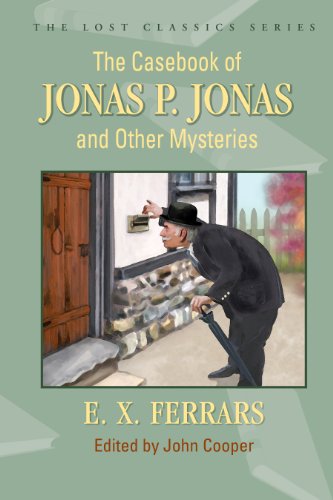 E. X. Ferrars (1907-1995) was born Morna Doris MacTaggart and known as Elizabeth Ferrars in Great Britain. By whatever name, she was an elegant crime writer, specializing in the traditional, classic mystery. She remains,wrote one reviewer, one of the most adept and intelligent adherents of the whodunit form. Her characters were always distinctly drawn, usually (but not quite always) likable, and her settings vividly described. Like many of the Golden Age writers, she often set her mysteries in English villages, but her books could range as far as Cyprus, Greece, and Africa. The Casebook of Jonas P. Jonas contains seventeen previously uncollected stories, including the six cases of Jonas P. Jonas who retells his sleuthing exploits in the hope that his niece will write his memoirs. This is the thirty-fourth volume in Crippen & Landru's Lost Classics series uncollected detective and mystery stories by great writers of the past. The book is edited by the detective-fiction-expert John Cooper, who has also edited collections by Michael Gilbert, Michael Innes, and Julian Symons. The cover illustration is by Gail Cross, and the Lost Classics design is by Deborah Miller.

1. The Casebook of Jonas P. Jonas and Other Mysteries