Items related to The Emily Dickinson Reader: An English-to-English Translatio... 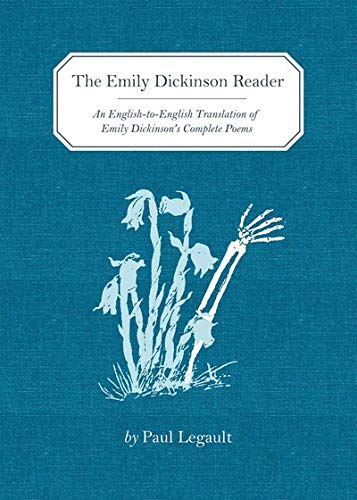 Perfect for the poetry fan who is short on time, The Emily Dickinson Reader offers Paul Legault’s ingenious and madcap one-line renderings of each of Dickinson’s 1,789 poems. Take that familiar chestnut, #314, a la Legault: Hope is kind of like birds. In that I don’t have any.” Or the classic hymn, #615: God likes to watch.”

As Dickinson herself said in #769 (basically, via our translator): This dead person used to be a person!” and The Emily Dickinson Reader is here to tell you what that person meant.

Paul Legault was born in Ontario and raised in Tennessee. He holds an M.F.A. in Creative Writing from the University of Virginia and a B.F.A. in Screenwriting from the University of Southern California. He is the author of two books of poetry, The Madeleine Poems (Omnidawn, 2010) and The Other Poems (Fence Books, 2011). He co-founded and co-edits the translation press Telephone Books.

"You know the kind of joke that's super-hilarious but also points in some genius way to the whole thing of the universe? Like that." Daniel Handler

"If Emily Dickinson had a Tumblr, these witty one-liners are what she'd be posting...You'll want to not only display this one on your coffee table, but also read it from start to finish." Marie Claire

"Let us agree that Legault’s version cannot, and is not meant to, rephrase Dickinson’s original, but rather seeks to recreate the spirit of the poem in a style and length that speak to today’s readers (who tweet and text while reading multiple books on a single flickering screen)." The Millions

"There are so many ways into and out of this book. If you want to put it on your coffee table and pick it up at random to have a good laugh, then that’s fine, but you can also read it all the way through (as I did), letting yourself be pulled between diverse ways of reading...n the end, through this structure of repetition, Legault’s Dickinson emerges just as bold, queer, crass, hungry, sexual, demanding, and repetitive as I always knew she was." Los Angeles Review of Books

"A valuable contribution to the field of radical translation. " Lambda Literary Review

"Sheer genius that begs to be recited aloud." Daily Candy