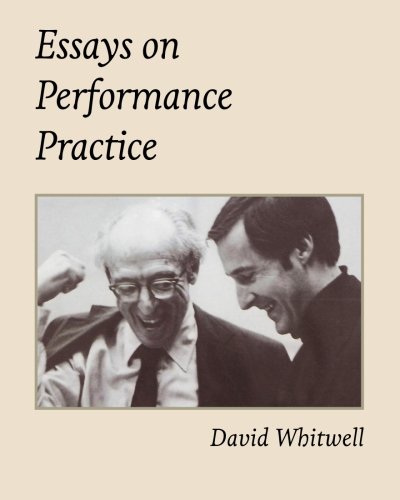 David Whitwell is one of the most influential college band directors of the twentieth century and the author of more than forty books on music, conducting, education, history and aesthetics. In this new collection of essays, "Essays on Performance Practice," he provides information on many of the topics missing from modern music education. Band conductors will find illuminating chapters on topics such as aesthetics, seating plans, time and placement, movement, and Classical Period performance idioms. This book also includes fifteen essays on Making Band Masterpieces Musical which address performance practice issues in the most popular wind band works such as the Holst Suites and the Milhaud Suite Française.

After doctoral studies on the early works of Mozart and music of the Pre-Classical Era, Dr. David Whitwell continued his studies at the famous Akademie fur Musik in Vienna, where he not only had discussions on performance practice with members of the Philharmonic, Vienna Symphony and Tonkunstler Orchestra, but was given the opportunity to study the marked performance materials of a number of earlier famous conductors. While living in Vienna he was invited by Karl-Heinz Fussel, of Universal Edition, to participate in the creation of a new Urtext Edition of the Mozart piano sonatas. His assignment to prepare the initial draft of the first seven sonatas led to detailed discussions on notational problems with Christa Landon, an authority on Schubert, and with Alexander Weinmann, the authority on early Viennese publishers. During a two-year residence in Salzburg he had discussions with such scholars as Ludwig Finscher of Frankfurt, the world’s authority on the Classical Period string quartet, as well as the numerous specialists of music collections in various European libraries. Some of these studies resulted in publications such as the Mozart/Jahrbuch, Music & Letters and the London Musical Times. Following his discovery of the Harmoniemusik repertoire he was invited to conduct and have discussions with a number of professional octets in Europe, including those of the Vienna Symphony, the Stuttgart Radio Orchestra, the Brabant Orchestra in The Netherlands, the State Philharmonic in Brno and faculty ensembles from conservatories in Germany, The Netherlands, London, Switzerland, Peru and at home with an octet from the Los Angeles Philharmonic and with professionals at a Chamber Music Festival in Santa Fe. In the course of his own conducting career, he was able to discuss performance practice with Eugene Ormandy, Leonard Bernstein, Milton Katims, Aaron Copland and a number of famous European musicians then retired in Southern California. He has lectured on performance practices in conservatories in Austria, Belgium, Bolivia, Brazil, Chile, China, England, Germany, Hungary, Israel, Italy, Korea, The Netherlands, Peru, Portugal, Russia, Switzerland and Taiwan.