Items related to Interview with The D.C. Sniper

Interview with The D.C. Sniper 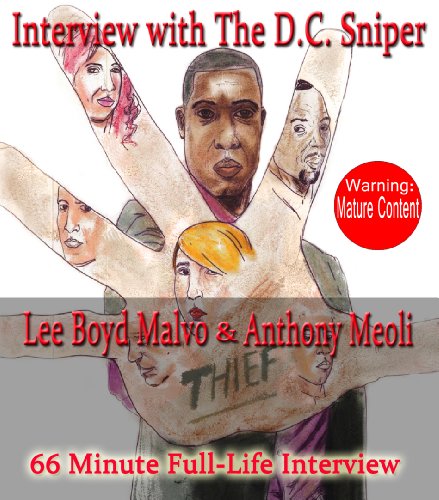 Interview with The D.C. Sniper is a 66-minute raw and unrehearsed interview between the D.C. Sniper (Lee Boyd Malvo) and co-author (Anthony Meoli). When it comes to this interview, its not what you've heard, but instead what you haven't. Listeners are blown away by what they learn and, surprisingly, gain from this listening experience.

Work-
Anthony Meoli has personally interviewed numerous serial killers and death row inmates including: Danny Rolling, Glen Edward Rogers, Loran Cole and Lee Boyd Malvo. He has spoken with more than a dozen other death row inmates over the telephone. On two occasions, he lectured about his experiences with serial personalities while attending Argosy University. Anthony appeared as a criminal profiler for a documentary about American serial killer Glen Rogers whom he has interviewed numerous times. The film will have U.S., U.K. and Australian distribution. He is the President of Meoli Forensic Consulting, LLC.

Correspondence-
Since 1998, Mr. Meoli has written to over one-hundred serial killers, both domestically and abroad. Some of these men and women have maintained steady correspondence for nearly a decade, while others were lost due to natural death or through state sanctioned executions.

Lee Malvo Connection-
He has been writing to Lee Boyd Malvo since February 2005. It was through these hundreds of letters and numerous telephone calls that Lee s confidence and trust were earned. Their relationship provided the basis for the release of this once private information.

Every parent, teacher, and anyone who deals with children should hear this interview. --Anonymous