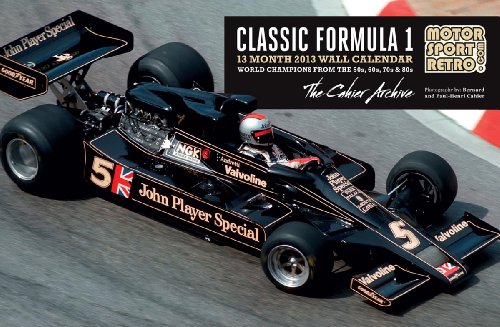 Presented by Motorsport Retro and featuring stunning photography from the Cahier Archive, the Formula 1 heroes of the second half of the 20th century are portrayed with some of the best photography from this time period. Racing fans will be captivated by the stunning images of World Champions like Mario Andretti, Emerson Fittipaldi, Jack Brabham, Jim Clark, James Hunt, Phil Hill, and more. A period look at a lost era in Grand Prix racing, this calendar is sure to please any gearhead who appreciates fine photography.

Paul-Henri Cahier is the son of Bernard Cahier, and was born in Paris on November 7th 1952. He grew up with the sound of race engines and the smell of Castrol R racing oil . . .. In those days, the 50s, friends who came to the family house were called Fangio, Moss, Brabham, Gurney or Hill, and after every race weekend, black-and-white photographic prints covered the floor of the living room. When he was thirteen, Bernard gave Paul-Henri one of his cameras (a Pentax) and let him discover on his own the world of F1 photography. No particular advice was given, basically just "do it!" By the time he was fifteen, Paul-Henri's photos were already being published, but it was not until the early 80s, and a first life of adventurer during which he met his Japanese wife Tami, that he decided to become a true professional photographer. Ever since, his never ending hunt for the most graphic, stunning, creative, image has always been the mark of his distinctive style. He has contributed to innumerable magazines and books around the world, and has had several solo books published as well. His black and white photographs were made using a Pentax, but the modern era ones were made using Canon cameras on Kodachrome film, before the final switch to digital and the Canon EOS 1Ds.