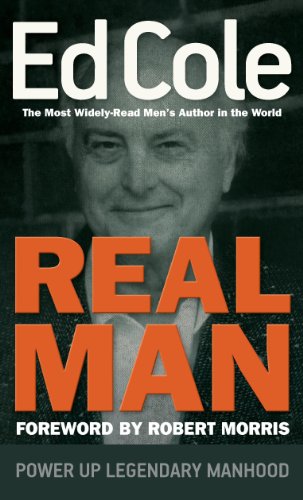 Real Man rips apart unfulfilling sterotypes, smothers the pressure of unrealistic demands, exposes cheap substitutes and sordid imitations of true manhood - while giving a man the power he needs to obtain the spirit and conviction of being a real man.

Dr. Edwin Louis Cole, known as the father of the Christian men's movement, was called by God to speak with a prophetic voice to the men of this generation. To that end, he founded the Christian Men's Network, a ministry that continues to strengthen men by reaching thousands each month with the reality that manhood and Christlikeness are synonymous. As a pastor, evangelist, missionary, business executive, and denominational leader, Dr. Cole, together with his late wife, Nancy, served the Lord in ministry for more than fifty years until his death in 2002. Over four million copies of his books are in circulation today in more than forty languages, and his work and vision are still carried on by his sons in the faith--godly men who were touched by Dr. Cole's ministry.

Book Description Watercolor Books. PAPERBACK. Condition: New. 1938629116 Brand New! Not Overstocks or Low Quality Book Club Editions! Direct From the Publisher! We're not a giant, faceless warehouse organization! We're a small town bookstore that loves books and loves it's customers! Buy from us and you get great service as well as a great price! Your business is valued and your satisfaction is guaranteed!|VCF. Seller Inventory # OTF-S-9781938629112

Book Description Paperback. Condition: New. Paperback. Shipping may be from multiple locations in the US or from the UK, depending on stock availability. 219 pages. 0.259. Seller Inventory # 9781938629112