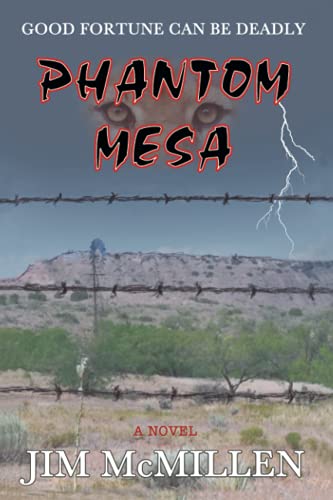 Aging Southwest Texas rancher Clovis Carlisle is met with unexpected resistance when news spreads that he is considering a lease contract that would place up to 80 towering wind turbines atop the one-and-a-half square mile mesa that towers 200 feet above the rest of his four-and-a-half square mile ranch. He is confronted by environmental and other issue-driven protesters, electricity-sensitive neighbors, and a pot-smoking, ex-college professor who manufacturers meth in his remote cabin. Augusto Klemen, a Mexican drug lord, formerly a freshman cadet at Clovis' military boarding school, discovers Clovis' location through wind farm news. Severely burned by Clovis over 50 years before in a hazing incident, Klemen seeks revenge. Making matters worse, a coldblooded Russian hit man is contracted to kill Clovis. Atop Phantom Mesa are ancient Comanche burial grounds, once called La Mesa Fantasma by Spanish explorers who reported ghosts there. Widower Clovis experiences several strange happenings there and visits his wife's cremated remains at the mesa, talking with her as if she was alive. One visit ends with a cliff-hanging episode of survival, including a confrontation with a straying cougar. The storyline visits Texas scenes in Houston, San Antonio, and Kerrville. Chilling episodes in Atlanta, Georgia, Ft. Pierce, Florida, and New Orleans, Louisiana lead to a series of circumstances that threaten the humble West Texas rancher.

Book Description Jim Mcmillen an Imprint of Telemachus Press, 2013. Condition: Good. Shows some signs of wear, and may have some markings on the inside. Seller Inventory # GRP80481231

Book Description Jim Mcmillen an Imprint of Telemachus Press, 2013. Condition: Good. A+ Customer service! Satisfaction Guaranteed! Book is in Used-Good condition. Pages and cover are clean and intact. Used items may not include supplementary materials such as CDs or access codes. May show signs of minor shelf wear and contain limited notes and highlighting. Seller Inventory # 1938701100-2-4