Items related to Do not Judge: Understanding the Vice of Passing Judgment...

Do not Judge: Understanding the Vice of Passing Judgment (Spiritual Life Series) (Volume 3) 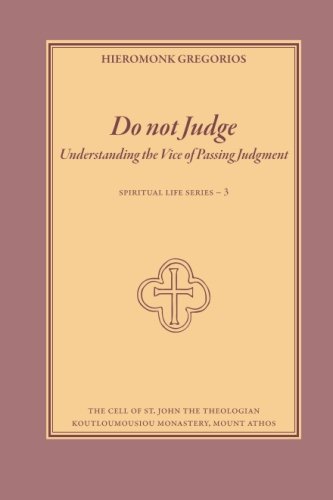 We often complain nowadays that to live according to God’s commandments is a difficult struggle. We think that to be truly Christian we have to fast, pray, give alms and perform other such virtuous acts. And as we ponder over the trouble we have to take to be virtuous and live a life in Christ, we lose heart and give up. Christ, however, suggested a very simple and easy way for us to please Him and avoid condemnation at the Last Judgment, saying: Do not judge in order not to be judged (Matt. 7:1-2).

1. Prologue, 2. Malicious Gossip and passing Judgment, 3. Causes and Types of Criticism, 4. The Results of Judging our Fellows, 5. Saints shelter the Sinner, 6. Correcting a Brother, 7. When we are the Subject of Gossip

Hieromonk Gregorios (in the world Panagiotis Hatziemmanuel) was born in Mytilene in 1936. He studied theology at the University of Athens, and then pursued graduate studies in area of Patristic Theology in Straßburg. After the completion of his studies he returned to Mytilene. There, in August of 1966, he received the Monastic Schema and was ordained to the Holy Diaconate. In September of the same year he was ordained to the Holy Priesthood, and the following month he departed for the Holy Mountain (Athos).

In August of 1968, accompanying the blessed Geronta Paisios and Archimandrite Vasilios, he took up residence at the Sacred Monastery of Stavronikita, and together they organized a new koinovion (cenobitic house). In 1971, Fr. Gregorios received the offikia of Spiritual Father, a ministry which he continues to serve in both Greece and Germany. Since 1980 he has lived, together with his brotherhood, in the Cell of St. John the Theologian, a dependency of the Sacred Monastery of Koutloumousiou.

His systematic engagement with the writings of the Fathers has borne fruit in articles, homilies and approximately 20 books (liturgical, pastoral, catechetical). He is most well-known for his book The Divine Liturgy: A Commentary in the Light of the Fathers, which has gone through multiple editions and been translated into many foreign languages.

1. Do not Judge: Understanding the Vice of Passing Judgment (Spiritual Life Series) (Volume 3)

2. Do not Judge: Understanding the Vice of Passing Judgment (Spiritual Life Series) (Volume 3)