Items related to The Greenland Breach 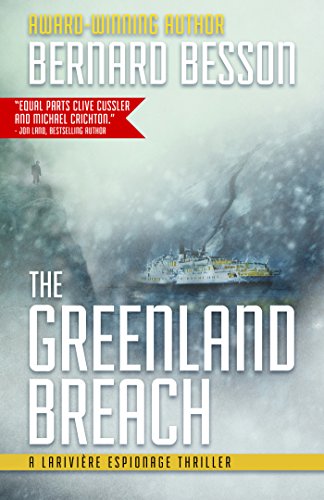 What is really at stake with global warming? The Arctic ice caps are breaking up. Europe and the East Coast of the Unites States brace for a tidal wave. Meanwhile, former French intelligence officer John Spencer Larivičre, his karate-trained, steamy Eurasian partner, Victoire, and their computer-genius sidekick, Luc, pick up an ordinary freelance assignment that quickly leads them into the heart of an international conspiracy. Off the coast of Greenland, a ship belonging to the French geological research firm Terre Noire is in serious trouble. The murder of an important scientist jeopardizes evacuation. On land another killer is roaming the icy peaks after researchers, while a huge crevasse splits Greenland apart. In the glacial silence of the great north, a merciless war is being waged. Global warming and subsequent natural disasters hide international rivalries over discoveries that will change the future of humanity.

""Today, one of the key battlegrounds is business, and both countries and multinational corporations are fighting for key strategic knowledge they hope to be the first to use. In my novel The Greenland Breach, my heroes are little-known actors in this economic war for the future. Those with the best information will win the battle. The blood splattered on the ice sheets of Greenland belongs to shadow fighters, mercenaries in battles we don’t learn about on the evening news."" --Bernard Besson

Translator's comments: “I’m a thriller addict. This is one I couldn’t put down. It’s stylish and fast-paced, with beautifully orchestrated action– ike a sophisticated manga–and it’s written by a man who knows exactly what he’s doing. Bernard Besson worked at the top in French intelligence and with the police; he knows the milieu, he’s very convincing. And his tale of environmental catastrophe feels truly timely. The images of the collapse of Greenland as the icecap melts are stunning and stay with you, every bit as much as the finely-tuned intrigue of industrial espionage. They’re up there, wreaking havoc!” --Julie Rose

Book Description Condition: Good. The item shows wear from consistent use, but it remains in good condition and works perfectly. All pages and cover are intact (including the dust cover, if applicable). Spine may show signs of wear. Pages may include limited notes and highlighting. May NOT include discs, access code or other supplemental materials. Seller Inventory # 4WIKSQ00033Q

Book Description Le French Book. Paperback. Condition: Very Good. A copy that has been read, but remains in excellent condition. Pages are intact and are not marred by notes or highlighting, but may contain a neat previous owner name. The spine remains undamaged. An ex-library book and may have standard library stamps and/or stickers. At ThriftBooks, our motto is: Read More, Spend Less. Seller Inventory # G1939474078I4N10

Book Description Le French Book (NY), 2014. Condition: Good. A+ Customer service! Satisfaction Guaranteed! Book is in Used-Good condition. Pages and cover are clean and intact. Used items may not include supplementary materials such as CDs or access codes. May show signs of minor shelf wear and contain limited notes and highlighting. Seller Inventory # 1939474078-2-4