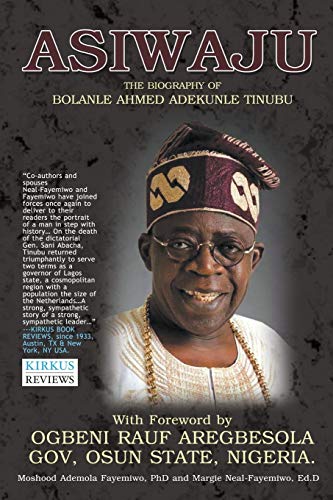 Asiwaju Tinubu, national leader, APC, engineered the first takeover of power by the opposition in Nigeria in 2015. He was the only politician standing as governor of Lagos state, southwest Nigeria between 1999 and 2007. This was a period the political blitzkrieg unleashed by the People's Democratic Party (PDP) under former President Olusegun Obasanjo swept the southwest like a tsunami and all opposition governors lost their seats. Tinubu retained his seat and administered Lagos state for eight progressive years without a cent/kobo from the PDP-controlled Federal Government

Who is Bolanle Tinubu? Where was he born and how did he grow up? What was his parentage like in the 1950s? What does Tinubu want in Nigeria? This is the first comprehensively researched biography of Jagaban.

"Asiwaju Bola Tinubu's feats are bold and exceptional; from business to governance and politics ... a true hero of democracy, a light that cannot be concealed!" - Rt. Hon. Yakubu Dogara, Speaker, 8th Assembly, House of Representatives, Abuja

"Asiwaju's pragmatism in politics are his very good sense of judgment in identifying and nurturing exceptional leaders. Tinubu's leadership role is a guide to the young and old." - Gov. Kashim Shettima, Borno state (2011-2019) Maiduguri