Items related to Patton And His Third Army

Patton And His Third Army 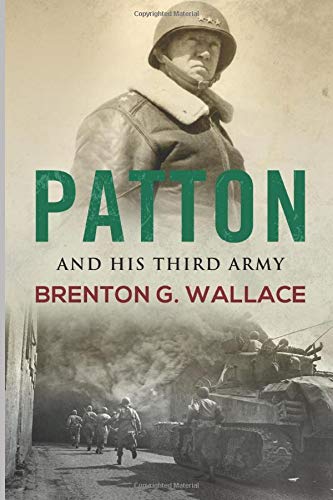 “May God have mercy upon my enemies, because I won’t.” General George S. Patton

At the start of the war the Nazi armed forces was one of the most feared war machines in history. It had swept away all opposition and threatened all of Europe with its dominating force.

But its supremacy was not to last.

In fact the gains made by Nazi Germany over the course of 1940 to 1942 were rolled back in ten short months as Patton and the Third Army roared through France, Belgium, Luxembourg, Germany, Czechoslovakia and Austria.

Through the course of this offensive Patton and his men faced some of the toughest fighting of World War Two, most notably when the Germans attempted to reverse the tide in the Battle of the Bulge.

Colonel Brenton G. Wallace was there to witness all of this as he served, and went on to earn five battle stars, with the Third Army through the course of its movements into Germany. His book, Patton and his Third Army is a remarkable account of this fascinating leader and his troops that changed the course of World War Two and revolutionized warfare.

Wallace uncovers the actions of the Third Army from its preparations in Britain, to its first engagements with the enemy, through to the major battles around the Falaise Pocket and countering the German offensives, breaking across the Moselle into Germany until they eventually subdued the Nazi forces.

This book provides fascinating insight into the strategies used by Patton to defeat the Germans. It is full of direct quotes from Patton that demonstrate his determination to win, such as: “When you have an adversary staggering and hanging on the ropes, don’t let up on him. Keep smashing, keep him off balance and on the run until you have knocked him out completely. That is the way to get this dirty business over quickly and at the smallest cost.”

Patton and his Third Army is essential reading for anyone interested in the European Theater of war and finding out more about this remarkable figure who Eisenhower said was “born to be a soldier”.

Brenton G. Wallace was an American army officer and architect. Through the course of the war he was awarded the Legion of Merit and Bronze Star from the United States, the Croix de Guerre with Star of Vermeil from France and also made part of the Order of the British Empire. He served under Patton as an assistance chief of staff and retired from the army as a Major General in the United States Army Reserve. His work Patton and his Third Army was first published in 1946. He passed away in 1968.

1. Patton And His Third Army

Book Description Independently published. Paperback. Condition: Very Good. A copy that has been read, but remains in excellent condition. Pages are intact and are not marred by notes or highlighting, but may contain a neat previous owner name. The spine remains undamaged. An ex-library book and may have standard library stamps and/or stickers. At ThriftBooks, our motto is: Read More, Spend Less. Seller Inventory # G1973427117I4N10

2. Patton And His Third Army

Book Description Independently published, 2017. Paperback. Condition: Good. Connecting readers with great books since 1972. Used books may not include companion materials, some shelf wear, may contain highlighting/notes, may not include cdrom or access codes. Customer service is our top priority!. Seller Inventory # S_247457068

Book Description Paperback. Condition: Used: Acceptable. BC242 HAS WEAR AND HEAVY FOLDING. This item is in Acceptable Condition. Book may have signs of shelf wear (dust). Ships same day or next available day. Please allow 2 to 7 days from USA. Brouhaha inc is committed to providing each customer with the highest standard of Customer Service.;J. Seller Inventory # EX-H8T0-VM30

4. Patton and His Third Army