Items related to We 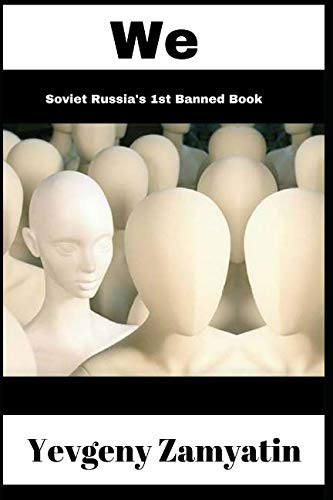 We is set into the far-flung future well after a war that had lasted two-hundred years. D-503 lives in the One State, a lone city constructed almost entirely of glass so that the State can keep an eye on the citizens at all times. Life is organized by the hour in order to maximum proficiency and maximum output from every inhabitant. People walk in step with each other and wear identical clothing with badges with their numbers/names for easy identification by the States agents. 'I' is not allowed. Only 'We' exists. People do not have names, they have a serial number. A permit is needed for times to have intimate relationships in order to lower the shades on the glass buildings the city is composed of. There is total surveillance of every person. While the final work to put the One State not only as an Earthbound government but to make it an interstellar one as well, D-503 begins to live a life of rebellion and secrets. He is in a fight against time as the One State has developed a procedure to eliminate Imagination in order to make all the people of the One State more efficient and less distracted.

Shipping: US$ 12.61
From United Kingdom to U.S.A.
Destination, rates & speeds