Lucia Orlando; Michelangelo De Maria Italy in Space: In Search of a Strategy 1957-1975 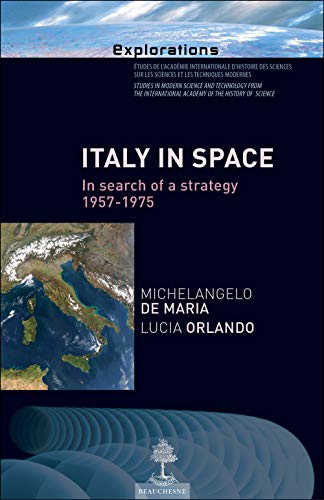 Book Description BEAUCHESNE, 2008. Paperback. Condition: NEUF. About two decades separate the launch of the Sputnik (1957) and theBirth of European Space Agency (1975). These two dates are chosen asMilestones in order to describe the early history of Italy in space.In the wake of the Sputnik shock, Italy was very early engaged in aRemarkable effort in space matters. Thanks to the brilliant work of thePhysicist Edoardo Amaldi and the aerospace engineer Luigi Broglio,Since the late Fifties Italy moved on towards the building of nationalSpace institutions, and at the same time cooperated to the creation ofThe European space organizations while fostering bilateral cooperationWith USA .The story of the "stop and go" development of the two major national programs, the San Marco project and the SIRIO project, which were the hallmark of about two decades, the Sixties and the Seventies, is reconstructed, following the parallel growth of Italys engagement in theScientific as well as institutional activities of European bodies.For the first time the relations among science, military, politics and economics are explored, in order to understand why the Italy of records - the nation which became the first country, following USA and URSS, to put a national satellite into orbit, operated by an all Italian team - betrayed this promising start.The development of a national aerospace industry and the building of dedicated infrastructures, such as the equatorial launching base and the telemetry and tracking ground stations, represent very relevant results of the pioneering phase of the Italian enterprise in space; nonetheless, theLack of a coherent space policy prevented Italy from exploiting space activities as a lever for industrial innovation and economic development. - Poids : 1200g - Langue : eng - Genre : Sciences appliquées Autres technologies. Seller Inventory # N9782701015187