Items related to 1968 Magnum Throughout the World

1968 Magnum Throughout the World

1968 Magnum Throughout the World 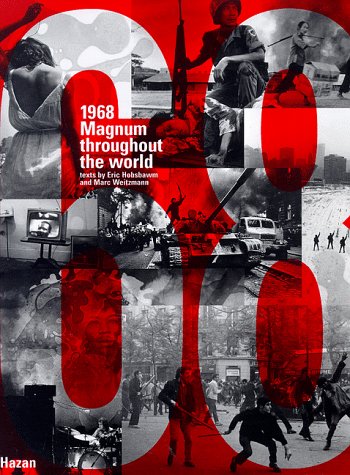 These two intense works attempt to convey the importance of a remarkable year that now seems so distant. Ali (Street Fighting Years, Collins, 1988), a former radical leader, offers an idealistic and uncritical survey of the student uprisings that swept through the world in 1968. His month-by-month approach works well for his narrative descriptions but limits the identification of over-arching themes or root causes of the rebellions. His strongest and most compelling recountings describe Alexander Dubcek's failure to sustain the Prague Spring movement in Czechoslovakia, the devastation and death caused by American bombings of North Vietnam, and the near toppling of the French government by an alliance of students and workers. Unfortunately, Ali's depictions of the American student movement are sketchy. He incorrectly identifies Senator Eugene McCarthy as the winner of the Democratic New Hampshire primary, and he demonstrates not unexpected bias by referring to Richard Nixon as "shifty and ghoulish." An optional purchase, suitable for large collections adding works on international student movements. The photographers of the 50-year-old Magnum Photos agency have compiled a powerful visual rendering of 1968. Although accompanied by essays and a useful chronology, the stark, full-page black-and-white photos are what capture the brio and angst of the times. Pictures of antiwar rallies, hippies and communal living, the aftermath of the King and Robert Kennedy assassinations, and victims of My Lai and the Biafran War are blunt reminders that if Ali views the Sixties as the best of times, they were also among the worst. Strongly recommended for large libraries seeking a photographic remembrance of this tumultuous year.AKarl Helicher, Upper Merion Twp. Lib., King of Prussia, PA
Copyright 1998 Reed Business Information, Inc.