Items related to Do 'Zimbabweans' Exist?: Trajectories of Nationalism...

Do 'Zimbabweans' Exist?: Trajectories of Nationalism, National Identity Formation and Crisis in a Postcolonial State (Africa in Development) 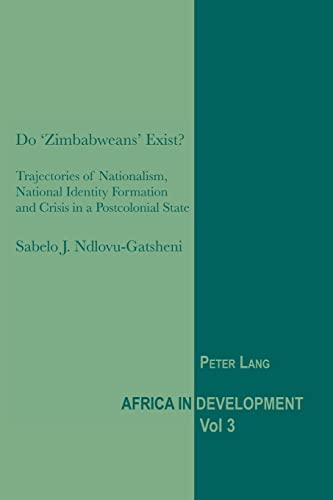 This book examines the triumphs and tribulations of the Zimbabwean national project, providing a radical and critical analysis of the fossilisation of Zimbabwean nationalism against the wider context of African nationalism in general. The book departs radically from the common ‘praise-texts’ in seriously engaging with the darker aspects of nationalism, including its failure to create the nation-as-people, and to install democracy and a culture of human rights. The author examines how the various people inhabiting the lands between the Limpopo and Zambezi Rivers entered history and how violence became a central aspect of the national project of organising Zimbabweans into a collectivity in pursuit of a political end.

The Author: Sabelo J. Ndlovu-Gatsheni is currently Lecturer in African Studies at the Ferguson Centre for African and Asian Studies at the Open University in Milton Keynes. He was previously Senior Lecturer and Head of the Department of International Studies at Monash University. He has published widely on Zimbabwean and South African history and politics with a specific focus on nationalism, identity, governance, state, nativism and conflict.

«A thoughtful meditation on the role and effects of violence in the colonial and post-colonial making of nation and state in Zimbabwe ... [the book] raises questions of significance for a wider audience.» (Mahmood Mamdani, Herbert Lehman Professor of Government, Columbia University)
«An important addition to the new critical scholarship on nationalism emerging out of the economic and governance crisis in Zimbabwe.» (Jane L. Parpart, Professor of Development Studies, University of The West Indies)
«An exciting theoretical-historiographical exploration of Zimbabwean history from the pre-colonial to the contemporary period.» (Brian Raftopoulos, Director of Research and Advocacy, Solidarity Peace Trust)

1. Do â Zimbabweans' Exist?: Trajectories of Nationalism, National Identity Formation and Crisis in a Postcolonial State

Book Description Peter Lang AG, Internationaler Verlag der Wissenschaften 2009-10-28, 2009. Paperback. Condition: Very Good. Item is in very good condition. If supplemental codes/CDs for textbooks are required please contact us prior to purchasing as they may be missing. Seller Inventory # DS-3039119419-2

2. Do Zimbabweans Exist? (Africa in Development)