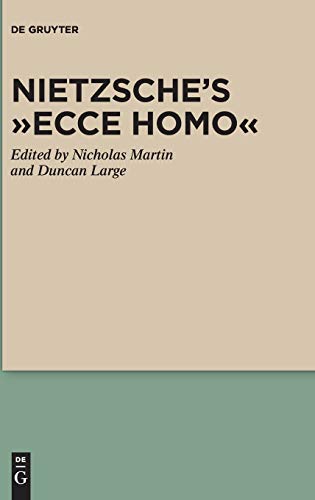 Friedrich Nietzsche’s intellectual autobiography Ecce Homo has always been a controversial book.Nietzsche prepared it for publication just before he became incurably insane in early 1889, but it was held back until after his death, and finally appeared only in 1908.For much of the first century of its reception, Ecce Homo met with a sceptical response and was viewed as merely a testament to its author’s incipient madness.This was hardly surprising, since he is deliberately outrageous with the ‘megalomaniacal’ self-advertisement of his chapter titles, and brazenly claims ‘I am not a man, I am dynamite’ as he attempts to explode one preconception after another in the Western philosophical tradition.In recent decades there has been increased interest in the work, especially in the English-speaking world, but the present volume is the first collection of essays in any language devoted to the work.Most of the essays are selected from the proceedings of an international conference held in London to mark the centenary of the first publication of Ecce Homo in 2008. They are supplemented by a number of specially commissioned essays.Contributors include established and emerging Nietzsche scholars from the UK and USA, Germany and France, Portugal, Sweden and the Netherlands.