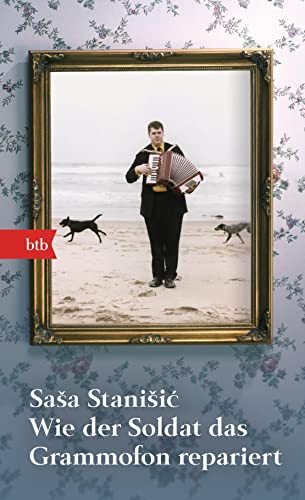 When the civil war destroys his home in Bosnia in the 1990s, the young Alexandar flees with his parents to the West. Alexandar conquers the foreign land of Germany with his restless curiosity, and he enthusiastically tells fantastic stories about his large family in the small Visegrad. Through his story telling, Alexandar is able to assuage his anxieties as well as bring back the “time when everything was good”. Alexandar grows up in a small village in Bosnia. His great talent is telling stories, something he inherited from his grandfather. He repeatedly drives his teacher to distraction because he just can’t keep himself confined to the given theme for his essays. But why should he? The stories of the plum harvest at his grandparents, of the betrayed fathers running amok, and of the adventures during the field trips with the Pioneers are much more exciting. But then the war destroys Alexandar’s world, and he and his parents flee to the West. Alexandar’s talent for story telling suddenly takes on a vital role. With his exuberant imagination he is able to keep alive his homeland in this peculiar land of Germany. In those earlier times, when his beloved grandfather died, he thought he could easily bring him back to life with his magic wand. But gradually, wanting to have a little more clarity of what really happened, Alexandar holds up his fantasies against reality. With How the Soldier Repairs the Gramophone, Sasa Stanisic has written an exuberant and extravagant burlesque tragi-comedy novel about the collapse of Bosnia and of German exile, of homeland and of life in a foreign country. After winning the Readers’ Prize in the Ingeborg Bachmann competition, he was avidly courted by many publishers. Interest in this author, who is a prime guest speaker on the theme of migration, is already widespread, and he has great appeal for young audiences as well. Press “Everything Sasa Stanisic’s language touches becomes alive; his figures are tangible, the world trustingly foreign. Add to this a fine sense for humour: grand cinema in the head!” Juli Zeh “Simultaneously poetic and humorous. A book against the fading of memories, one that will leave no reader indifferent.” Ilma Rakusa “This novel is simultaneously a farewell and an arrival. To the extent that Aleksandar/Sasa is able to affirm his past is he able to leave it behind him. We, for our part, can be gratified by the arrival of a young, highly talented storyteller to the German literary scene.” Frankfurter Allgemeine Zeitung “Sasa Stanisic has written an astounding first novel – broad-minded, dynamic, daring.” Frankfurter Rundschau “The astounding debut of a 28-year-old is ... a story of the loss of homeland, a story of growing up during the time of war, a family photo album of high-level humour. He has given our old German language a long, rich dose of oxygen. He provides a lesson on the power of storytelling and demonstrates that stories are capable of achieving what magic could not: to deny reality. This novel stands the world on its head, on quite a clever head. As notable literary critics are glad to predict, we have much to look forward to in this novelist.” Die Welt “How the Soldier Repairs the Gramophone is the story of a childhood in Visegrad, a city on the Drina, in which Christians, Muslims, Bosnians and Serbs are living together in a peaceful world – until politics, war and unfathomable powers destroy it. How Sasa Stanisic in this book writes the stories of this city with an unbelievable desire for invention and for storytelling, and how a short time later he allows this city to be devoured, at first by tiny details, then by hate, blood, and war – that is great art.” Frankfurter Allgemeine Sonntagszeitung “... one wants there to be readers of this book. Readers who let themselves be seduced by a tone that penetrates to the heart and by a story that has a continuance extending far beyond the historical moment.”