Items related to Albert Einstein - Chief Engineer of the Universe: One...

Albert Einstein - Chief Engineer of the Universe: One Hundred Authors for Einstein

Albert Einstein - Chief Engineer of the Universe: One Hundred Authors for Einstein 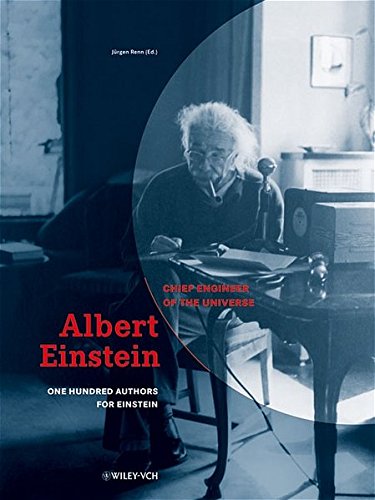 In 1905, Albert Einstein published five scientific articles that fundamentally changed the world-view of physics: The Special Theory of Reativity revolutionized our concept of space and time, E=mc² became the best-known equation in physics.

On the occasion of the 100th aniversary of his "annus mirabilis" 1905, the UNESCO declared the year 2005 the "World Year of Physics", in order to draw attention to the impact of physics. The Max Planck Institute for the history of science dedicates an exhibition in the Kronprinzenpalais in Berlin to the probably most important scientist of the 20th century.

In this book, 100 authors explain the historical background of Einstein's life and work, shed light on many different aspects of his biography, and on the scientific fields and topics that are connected to Einstein's work. The authors are some of the most renowned Einstein researchers in the world, such as Jürgen Ehlers, Peter Galison, Zeev Rosenkranz, John Stachel and Robert Schulmann.

The essays form a bridge between scientific and cultural history, opening up a perspective on Einstein's biography which goes beyond the traditional picture of the exceptional science genius.

This book is dedicated to the changes in our worldview that are due to work Albert Einstein. It comprises essays and apercus from more than 100 authors, who examine the life and work of Einstein from very different perspectives. The intention is to give the reader the pleasure of wandering through the same worlds that Einstein did. The first section looks at the question of how worldviews arise through the acquisition of knowledge, and how new insights can cause these worldviews to collapse. The essays in the second section are dedicated to private issues, such as Einstein's love of music, as well as to the central scientific aspects of his life's work, for example, the concept of inertia or gravitational lensing. The third section deals with issues of contemporary science such as astrophysics and cosmology as well as quantum mechanics and particle physics. This final section also examines the political legacy of Einstein's work.

Among the authors are prominent scientists from all over the world, who are able to communicate to readers without academic preparation an overview of the present status of research related to Einstein.

Professor Jurgen Renn is director at the Max Planck Institute for the History of Science in Berlin. His research focuses primarily on the emergence of mechanics in antiquity, the interaction between practical and theoretical knowledge since the Renaissance, the transition from classical to modern physics, the development of the theory of relativity, and the application of new media to the history of science. Professor Renn is coordinator of the exhibition 'Albert Einstein - Chief Engineer of the Universe' 2005 in Berlin.