Items related to Imaging in Treatment Planning for Sinonasal Diseases... 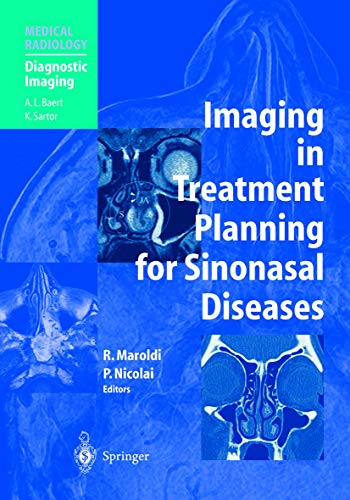 - Based on 15 years' experience in integrating clinical and radiological information

This book provides both basic and advanced information on the clinical presentation, imaging findings and treatment of sinonasal diseases. For each specific disease, the rationale underlying the treatment strategy is discussed and the imaging findings critical to the decision-making process are identified. This is an original approach and reflects the constant team effort at the editors' institute over the past 15 years to integrate clinical and radiological information with the aim of establishing the most appropriate treatment. Special emphasis is placed on the identification of clinical and imaging data that allow selection of an endonasal or an external approach in surgical candidates. The value of planning an integrated endoscopic and radiological follow-up in the different diseases is also thoroughly reviewed. Through the correlation of imaging with endoscopic or clinical findings, this book will enable radiologists to familiarise themselves with the "otorhinolaryngological world" and clinicians to understand more fully the significance of specific radiological findings. It will serve as an invaluable guide to the selection of imaging techniques.

Born in Vicenza on January 14th, 1954, he graduated in Medicine from Padua University in 1979, He was resident at Verona Medical School, where he was board certified in Radiology in 1984. He began his career at the Department of Radiology at the University of Brescia in 1982 where he was appointed Associate Professor of Radiology in the year 2000.

Since the beginning of his career, head and neck radiology was the main interest. By mean of a continous cooperation with the Otorhinolaryngologic Clinic of the University of Brescia, several aspects of CT and MR imaging have been subjects of analysis and publications. Among these, the most remarkable ones regard the analysis of normal and abnormal CT findings of the post-operative larynx, the imaging findings of cocaine midline destructive lesions, and the assessment of the role of MR in evaluating invasion of the mandible in oral cavity and oropharyngeal neoplasms.

Dr. Nicolai is the author of 80 scientific publications (26 in national and 54 in international journals), which are mainly focused on head and neck oncology and endoscopic sinus surgery. Most of the publications reflects the interest which along the years has been developed with the colleagues of the Department of Radiology of the University of Brescia in understanding clinical-radiological correlations in inflammatory as well as neoplastic diseases of the head and neck.

Book Description Springer, 2004. Condition: Good. A+ Customer service! Satisfaction Guaranteed! Book is in Used-Good condition. Pages and cover are clean and intact. Used items may not include supplementary materials such as CDs or access codes. May show signs of minor shelf wear and contain limited notes and highlighting. Seller Inventory # 3540423834-2-4