Items related to The Theory of Oligopoly with Multi-Product Firms

The Theory of Oligopoly with Multi-Product Firms 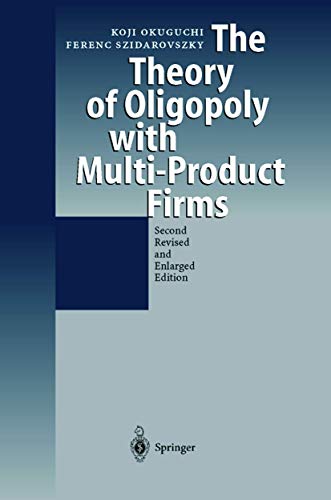 In the mid 1960's both authors undertook independent works in oligopoly.and game theory. However, it was not until 1983 that they formally met. Since then, they have continued meeting either in Budapest or Tokyo. Their collaboration has resulted in numerous publications as well as in this work. Essentially, this book has two origins. First, it originated in previous results, either published or circulated in mimeograph form. Finely sifting their results, the authors constructed a concise reinterpretation of their achievement to date. However, this unifying process led to the second origin. Reconsideration, particularly in this comprehensive approach, generated new results. This was especially true in the analysis of the existence, uniqueness and global stability of the Cournot-Nash equilibrium for oligopoly with multi-product flrms, and for several modilled Cournot and related models. This book should be ideal for graduate students in economics or mathematics. However, as the authors have firmly grounded their ideas in the formal language of mathematics, the student should possess some background in calculus, linear algebra, and ordinary differential and difference equations. Additionally, the book should be useful to researchers in oligopoly and game theory as well as to mathematically oriented economists. The methodology developed for analyzing the existence and stability of oligopoly equilibrium should prove useful also in theoretical analysis of other economic models. Weare both very grateful to Professor Wilhelm Krelle for his careful review and helpful suggestions. In addition, Koji Okuguchi wishes to thank Professors W.

1. Theory Of Oligopoly With Multi-Product Firms