Items related to Masculinity, Femininity and other Curiosities in Tod...

Uddin, Shahab Masculinity, Femininity and other Curiosities in Tod Browning's 'Freaks' and 'Dracula'

Masculinity, Femininity and other Curiosities in Tod Browning's 'Freaks' and 'Dracula' 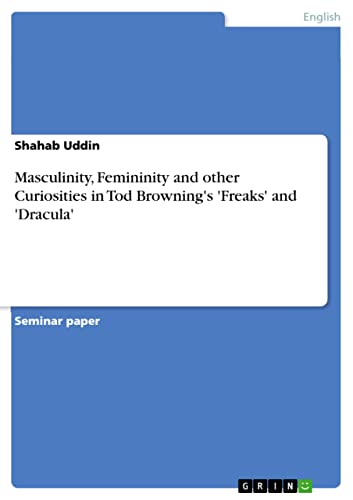 Seminar paper from the year 2008 in the subject American Studies - Culture and Applied Geography, grade: 1, University of Frankfurt (Main) (Amerikanistik), course: Introducing Tod Browning, language: English, abstract: Ever since the horror genre has established, it has fascinated viewers around the world. Despite (and to some degree also because of) its controversial status, the horror film has gained much popularity. At the same time it has also been the target of critics. Especially in academic writing the horror film seems to have been neglected. Nonetheless, the horror film has this one peculiarity that other genres don't have. As Rick Worland correctly stated, "A given phase of the horror film often reveals something about the times that produced it, exposing anxieties and outright fears of those days, though doing so in a roundabout or thoroughly unintentional way." (Worland 55-56). Thus there have been many approaches on the horror film and the cultural fear in it. Among other interpretations, the theory of the cultural fear of war has become significant. The connection between war and the cultural fear is definitely not arbitrary. To a great part, this expression is the product of the fearful events that occured in western society. But the content of most horror movies not only indicates the fear of events that took place. these expressions in the horror film have often been understood as metaphors of the fear of a social reconstruction, hence as the fear of things to come- Wars have always existed, and the horror genre has not, at least not as aunique genre. Compared to other genres in literature, the gothic novel - nowadays recognized as the predecessor of the horror genre - came about very late. The emancipation of women, being an important factor in the social construction of modern times, has also established very late. Is this just a coincidence, or does this indicate a stronger conn

1. Masculinity, Femininity and other Curiosities in Tod Browning's 'Freaks' and 'Dracula'