Items related to Muhammad Asad: a mediator between the Islamic and the...

Hoenger, Tobias Muhammad Asad: a mediator between the Islamic and the Western world

Muhammad Asad: a mediator between the Islamic and the Western world 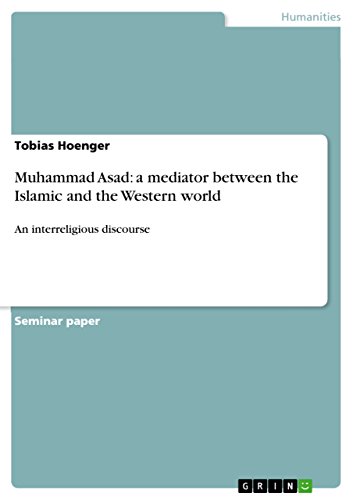 Seminar paper from the year 2010 in the subject Theology - Miscellaneous, University of Bern (Theological Institute), course: Modern Trends in Islam , language: English, abstract: I. Introduction "My story is simply the story of a European's discovery of Islam and of his integration within the Muslim community." This is one of the first sentences of the book, The Road to Mecca written by Muhammad Asad and published in 1955. It is surely true, he just wanted to live the Islam way and be a part of the Muslim community. Asad was an Austrian Jew from Lemberg who converted to Islam and became one of the most meaningful Muslim thinkers of the 20 century. He was a visionary, a diplomat and he searched for adventures. As an author and Koran translator he had a big influence in the modern theologian thinking of Islam and became a great pioneer and cultural mediator between the Western world and Islam. He had a controversial life, but also had (and still has) a number of critics and on the other hand he has a lot of sympathizer. The Road to Mecca is a great adventure story with a warm-hearted picture of the religion of Islam, (unlike the stories we hear about Islam in the media today). In the present paper two interesting points in relation to Muhammad Asad will be dealt with. Many reports draw a picture of a very controversial Asad relating to Islam. Some of his critics accuse him of not being strict in his beliefs; who would often changes his views. For example, at first he turned his back to Western civilization and then suddenly came back to live in New York. In relation to this point, the following questions are of interest: 1. What is Muhammad Asad's comprehension of Islam? As has been noted before, Asad tried to build bridges between the abyss of the Muslim world and the West. It would be an exercise to list some important points of his life and his thinking to show how he contributed to the interreligious dialogue. 2. How did Asad mediate between the Western w