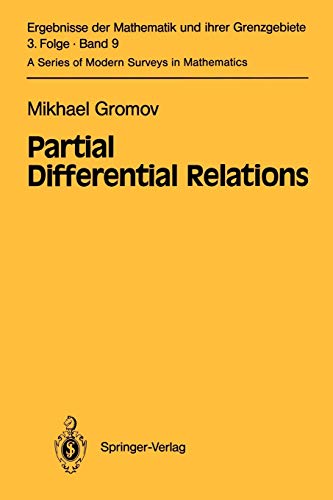 The classical theory of partial differential equations is rooted in physics, where equations (are assumed to) describe the laws of nature. Law abiding functions, which satisfy such an equation, are very rare in the space of all admissible functions (regardless of a particular topology in a function space). Moreover, some additional (like initial or boundary) conditions often insure the uniqueness of solutions. The existence of these is usually established with some apriori estimates which locate a possible solution in a given function space. We deal in this book with a completely different class of partial differential equations (and more general relations) which arise in differential geometry rather than in physics. Our equations are, for the most part, undetermined (or, at least, behave like those) and their solutions are rather dense in spaces of functions. We solve and classify solutions of these equations by means of direct (and not so direct) geometric constructions. Our exposition is elementary and the proofs of the basic results are selfcontained. However, there is a number of examples and exercises (of variable difficulty), where the treatment of a particular equation requires a certain knowledge of pertinent facts in the surrounding field. The techniques we employ, though quite general, do not cover all geometrically interesting equations. The border of the unexplored territory is marked by a number of open questions throughout the book.