Items related to Stochastic Calculus of Variations in Mathematical Finance... 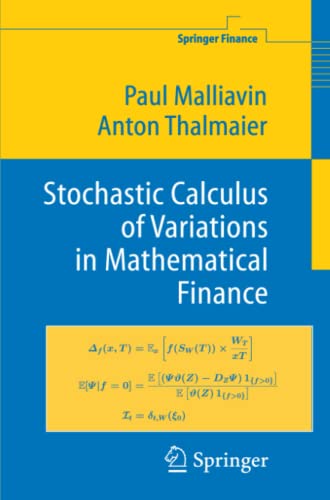 Malliavin calculus provides an infinite-dimensional differential calculus in the context of continuous paths stochastic processes. The calculus includes formulae of integration by parts and Sobolev spaces of differentiable functions defined on a probability space. This new book, demonstrating the relevance of Malliavin calculus for Mathematical Finance, starts with an exposition from scratch of this theory. Greeks (price sensitivities) are reinterpreted in terms of Malliavin calculus. Integration by parts formulae provide stable Monte Carlo schemes for numerical valuation of digital options. Finite-dimensional projections of infinite-dimensional Sobolev spaces lead to Monte Carlo computations of conditional expectations useful for computing American options. The discretization error of the Euler scheme for a stochastic differential equation is expressed as a generalized Watanabe distribution on the Wiener space. Insider information is expressed as an infinite-dimensional drift. The last chapter gives an introduction to the same objects in the context of jump processes where incomplete markets appear.

"This short book introduces Malliavin calculus and illustrates important applications in finance. ... For readers with the necessary mathematical skills, this is a valuable introduction to the mathematics and financial applications of Malliavin calculus. ... it provides a direct gateway to the relevant literature." (www.riskbook.com, November, 2006)

"The book under review is on the applications of the Malliavin calculus to financial mathematics. ... The authors have written a short book introducing the reader efficiently to the key points of the Malliavin calculus in mathematical finance. ... Also the list of references is comprehensive and updated, and gives a clear picture of the activity and relevance of this approach to many financial problems. ... This book is recommended to all researchers in mathematical finance." (MathSciNet, February, 2007)

"The book under review is on the applications of the Malliavin calculus to financial mathematics. ... The compact form is to the advantage of the reader, who is led to the applications rather quickly. ... This book is recommended to all researchers in mathematical finance. It shows how advanced mathematics can play an important role in solving practical financial problems as well as developing new understanding and concepts." (Fred Espen Benth, Mathematical Reviews, Issue 2007 b)