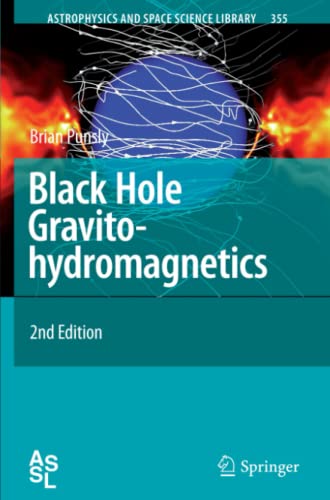 Black hole gravitohydromagnetics (GHM) is developed from the rudiments to the frontiers of research in this book. This second edition of the book is updated throughout and contains a completely new chapter discussing the state-of-the-art.

Black hole gravitohydromagnetics (GHM) is developed from the rudiments to the frontiers of research in this book. GHM describes plasma interactions that combine the effects of gravity and a strong magnetic field, in the vicinity (ergosphere) of a rapidly rotating black hole. This topic was created in response to the astrophysical quest to understand the central engines of radio loud extragalactic radio sources. The theory describes a "torsional tug of war" between rotating ergospheric plasma and the distant asymptotic plasma that extracts the rotational inertia of the black hole. The recoil from the struggle between electromagnetic and gravitational forces near the event horizon is manifested as a powerful pair of magnetized particle beams (jets) that are ejected at nearly the speed of light. These bipolar jets feed large-scale magnetized plasmoids on scales as large as millions of light years (the radio lobes of extragalactic radio sources). This interaction can initiate jets that transport energy fluxes exceeding 1047 ergs/s.
This second edition of the book is updated throughout and contains a completely new chapter discussing state of the art and results of numerical simulations of ergospheric disk jets occuring in magnetohydrodynamic accretion flows.

From reviews of 1st edition:

"Black Hole Gravitohydromagnetics is a serious and important book that should be studied and used by every researcher of black hole plasma astrophysics." (Marek Abramovicz: General Relativity and Gravitation, Vol. 35, No. 6, June 2003)