Items related to Treatment of Human Parasitosis in Traditional Chinese... 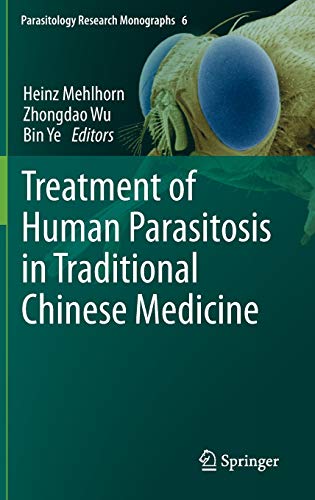 This book intensively examines the efficacy of plant-derived products that have been used for over a thousand years by practitioners of so-called Traditional Chinese Medicine in the light of recent chemotherapeuticals. The chapters were written by renowned Chinese medical researchers and are supplemented by results obtained in German antiparasitic research projects.

Parasites and emerging diseases are a major threat of our time, which is characterized by an enormous increase in the size of the human population and by an unbelievably rapid globalization that has led to the daily transport of millions of humans and containers with goods from one end of the earth to the other. Furthermore the slow but constant global warming offers new opportunities for many agents of diseases to become established in new areas. Therefore it is essential that we develop precautions in order to avoid epidemics or even pandemics in overcrowded megacities or at the large-scale farm animal confinements that are needed to secure a steady flow of food in the crowded regions of the world.

Of course intensive research in the field of chemotherapy since 1900 has produced unbelievable breakthroughs in therapies for formerly untreatable and thus deadly diseases. However, a large number of untreatable diseases remain, as well as a constantly growing number of agents of disease that have developed resistances to standard chemical compounds.

As such, it is not only worthwhile but also vital to consider the enormous amounts of information that have been obtained by human “high cultures” in the past. Examples from the past (like quinine) or present (like artemisinin, a modern antimalarial drug) show that plant extracts may hold tremendous potential in the fight against parasites and/or against vector-transmitted agents of diseases.