Items related to Electromagnetic Theory of Gratings (Topics in Current... 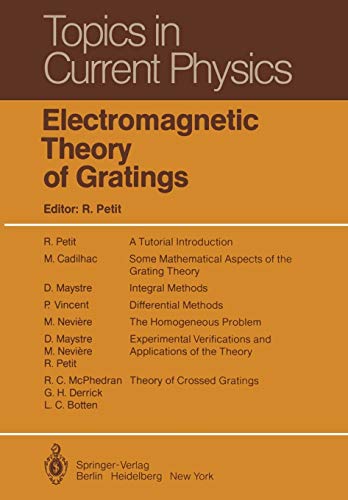 When I was a student, in the early fifties, the properties of gratings were generally explained according to the scalar theory of optics. The grating formula (which preŁ dicts the diffraction angles for a given angle of incidence) was established, experŁ imentally verified, and intensively used as a source for textbook problems. Indeed those grating properties, we can call optical properties, were taught'in a satisfacŁ tory manner and the students were able to clearly understand the diffraction and dispersion of light by gratings. On the other hand, little was said about the "energy properties", i. e. , about the prediction of efficiencies. Of course, the existence of the blaze effect was pointed out, but very frequently nothing else was taught about the efficiency curves. At most a good student had to know that, for an echeŁ lette grating, the efficiency in a given order can approach unity insofar as the diffracted wave vector can be deduced from the incident one by a specular reflexion on the large facet. Actually this rule of thumb was generally sufficient to make good use of the optical gratings available about thirty years ago. Thanks to the spectacular improvements in grating manufacture after the end of the second world war, it became possible to obtain very good gratings with more and more lines per mm. Nowadays, in gratings used in the visible region, a spacing smallŁ er than half a micron is common.