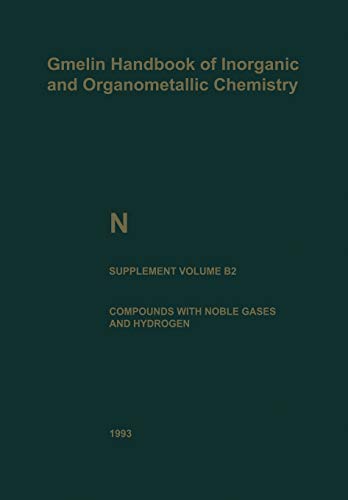 "Nitrogen" SuppL. Vol. 82 continues the description of binary compounds composed of nitrogen and hydrogen (nitrogen hydrides). While" Nitrogen" SuppL. Vol. 81 covers mono- nitrogen compounds, the present volume comprises compounds having two, three, four, or more nitrogen atoms. Hydrazine, N H, and its ions N2Ht and N2H + were not included. 2 4 (Reference is made to a voluminous monograph: E.W. Schmidt, Hydrazine and its Deriva- tives: Preparation, Properties, Applications, Chichester 1984, 1088 pages.) Among the dinitrogen compounds, the diazenyl cation, N H+, has been extensively inves- 2 tigated, especially in regards to spectroscopic and kinetic properties, because of its occur- rence in interstellar space. Chemically well-characterized are diazene, N H, the simplest 2 2 unsaturated nitrogen hydride which is used as a hydrogenation reagent, and the hydrazyl radical, N H, which is frequently present as an intermediate during the formation and 2 3 decay of nitrogen-hydrogen compounds. The major portion of this volume is taken up by hydrogen azide or hydrazoic acid, HN, the first member in the series of trinitrogen compounds. Known to be highly explosive 3 in pure form, it can be safely handled when diluted. Thus, a great deal of information is available mainly on its properties as a chemical reagent and its decomposition processes.