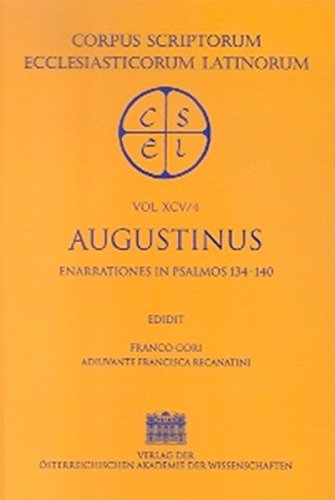 Augustines Enarrationes in Psalmos constitute a complete commentary on the Book of Psalms. They were composed as homilies he preached and as commentaries he dictated. Their rapid and widespread reception throughout the Middle Ages was due to their spiritual and moral exegesis, which monastic circles found particularly attractive. The first complete edition to be based on textual criticism and on scholarly analysis aims to replace the old Muarist text (Paris, 1681). Because of the extraordinary lenth of the complete text of the Enarrationes in Psalmos and its vast manuscript tradition the edition project has been divided among two teams working in Vienna and Rome. After the edition of the commentaries on the Gradual Psalms (Enarrationes 119-133, CSEL XCV/3, Vienna 2001), this second volume contains the exegesis of Psalms 134-140; the homilies were given in different places between the years 394 and 422.