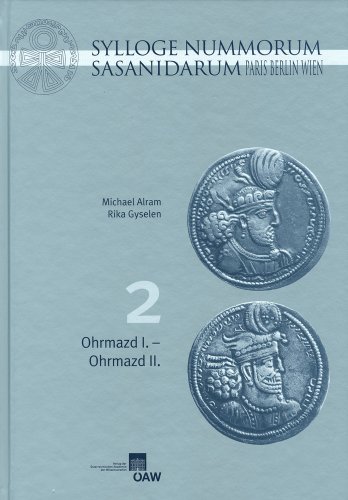 English summary: The second volume of the series "Sylloge Nummorum Sasanidarum Paris-Berlin-Wien" covers the reigns of Hormizd I (271/2-273 CE), Bahram I(273-276 CE), Bahram II (276-293), Narseh (293-302/3 CE) and Hormizd II (302/3-309/10) and thus closes the gap between the already published first and third volumes. In addition to the comprehensive numismatic commentaries, a catalog and illustration (in French and German) this volume contains an extensive historic-numismatic introduction in English as well as chapters dealing with the dating of the Kushano-Sassanid mints (N. Schindel), the Paikuli-Inscription (C. Cereti, G. Terribili) as well as the metallurgical investigations of the aforementioned coins (Linke, et al., M. Blet-Lemarquand.)
The volume is therefore an indispensable handbook for numismatists, historians, art historians or archaeologists who are interested in Iranian history or Late Antiquity.
The third volume of Sylloge Nummorum Sasanidarum, Paris-Berlin-Vienna, covers the period from Shapur II (309379) to the 2nd reign of Kawad I (499-531). This period is of great importance for Sasanian numismatics since the general use of mint signatures was introduced during the course of the 5th century. This facilitates deeper insights than before into Sasanian administrative and economic history. The 5th century was also decisive for the monetary system of the Late Sasanian Empire in terms of typology and denominations.
An introductory section presents the results obtained from analysis of the coins of the 13 kings covered in this volume. An article by S. Stanek and R. Linke deals with metal analyses. Chapters dealing with numismatic questions are dedicated to each king individually, with special emphasis on style and mint locations. These numismatic articles are accompanied by brief historical surveys. English and French summaries round off the volume. The catalogue contains approximately 1,500 coins from Paris, Berlin and Vienna as well as around 500 additional photographs. As in volume 1, depictions of rock reliefs, silver bowls, seals and the like have also been included in order to present and discuss the coins within the wider context of other primary sources relating to Sasanian history.