Items related to The Book of Tiki

Sven Kirsten The Book of Tiki 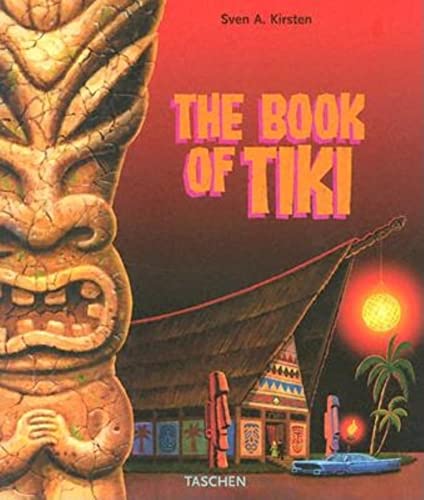 Tiki is the manifestation of exotic visions of island culture borrowed from tales told by American soldiers stationed in the South Pacific during World War II: trees loaded with exotic fruits, sleepy lagoons, white-sand beaches, and gorgeous people wearing grass feathers as they danced half-naked during all-night orgies of food and music. Americans seized these visions and incorporated fantasy into reality: mid-century fashion, popular music, eating and drinking, and even architecture were influenced by the Tiki trend.
This enlightening and hilarious guide casts the reader as an ""urban archaeologist,"" exploring the lost remnants of the Tiki culture across the United States and discovering relics from this forgotten civilization in thrift stores, yard sales, and used book and record emporia. A combination of nostalgia and fascinating pop cultural study, this volume is a long overdue investigation into the cult of the Tiki. Almost makes you want to dig up those old grass skirts and throw luau

Sven Kirsten’s loving look at the post-war craze for all things Polynesian is filled with photos ... -- Travel Etc. Magazine, December 2000

The amazing world of Tiki has never been more lovingly and thoroughly documented. -- Paper Magazine, December 2000