Items related to Book of Tiki: A Guide for the Urban Archeologist

Kirsten, Sven A Book of Tiki: A Guide for the Urban Archeologist

Book of Tiki: A Guide for the Urban Archeologist 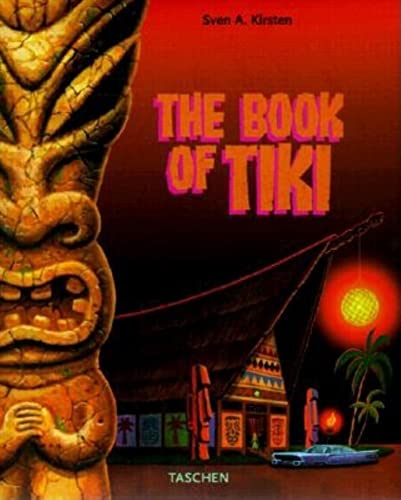 After World War II, US soldiers stationed in the South Pacific returned home with tales of trees loaded with exotic fruits, sleepy lagoons, white-sand beaches, and gorgeous people wearing grass and feathers as they danced half-naked during all-night orgies of food and music. The American imagination seized on this exotic version of island culture, and it exerted a massive influence on Fashion, pop music, eating and drinking, and even architecture. Everything from bars to bowling alleys adopted elements of Polynesian design. Tikis, the carved wooden and stone statues from across the Pacific, found their way into every hotel lounge and suburban living room. But as the fad was reaching it's peak, the big generation gap of the late 60s put a sudden end to Polynesian escapism as the children of the Tiki revellers decided to seek their own Nirvana in sex, drugs, and rock'n'roll. The 90s have seen a revitalised interest in this kitsch anomaly of post-war America -- lounge bars and the sound of ""exotica"" are back in. This enlightening and hilarious guide casts the reader as an ""urban archaeologist"" exploring the lost remnants of Tiki culture across the States -- discovering relics from this forgotten civilisation in thrift stores, yard sales, and used book and record emporia. A combination of nostalgia and fascinating pop cultural study, this volume is a long overdue investigation into the cult of the Tiki.

Sven Kirsten’s loving look at the post-war craze for all things Polynesian is filled with photos ... -- Travel Etc. Magazine, December 2000

The amazing world of Tiki has never been more lovingly and thoroughly documented. -- Paper Magazine, December 2000

The In Search of Tiki: A Guide for the Urban Archeologist (Taschen specials)

In Search of Tiki

Book Description Hardcover. Condition: Very Good. 1st Edition. In VGC apart from a tear on the front cover where a price sticker had been placed, appx 4cm by 2cm. Otherwise the book is in excellent 'read' condition. Hardcover with a soft rubbery feel to the book front. Dispatched from the UK within 3 working days. Seller Inventory # ABE-1650464427987

Book of Tiki: A Guide for the Urban Archeologist

Book Description Condition: Acceptable. The book is 100% readable but visibly worn, and damaged. This may include stains, tears, rips, folded pages, binding damage, dents, scuffs, scratches and sticker residue. The book also may contain heavy highlighting and notes. Please ask for photos as our books are donations and may not contain above mentioned defects. Seller Inventory # 4JQO8U000WZB

The book of tiki.