Items related to Bulfinch's Mythology: the Age of Fable (TREDITION... 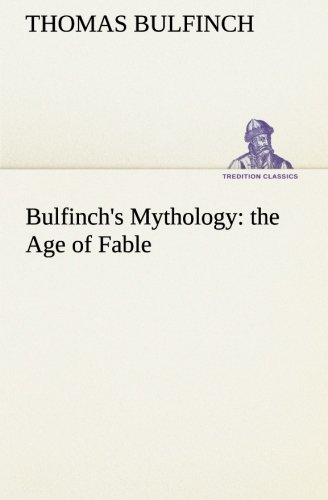 This book is part of the TREDITION CLASSICS. It contains classical literature works from over two thousand years. Most of these titles have been out of print and off the bookstore shelves for decades. The book series is intended to preserve the cultural legacy and to promote the timeless works of classical literature. Readers of a TREDITION CLASSICS book support the mission to save many of the amazing works of world literature from oblivion. With this series, tredition intends to make thousands of international literature classics available in printed format again – worldwide.

First published in 1855, Bulfinch's Mythology has introduced generations of readers to the great myths of Greece and Rome, as well as time-honored legends of Norse mythology, medieval, and chivalric tales, Oriental fables, and more. Readers have long admired Bulfinch's versions for the skill with which he wove various versions of a tale into a coherent whole, the vigor of his storytelling, and his abundant cross-references to poetry and painting, demonstrating the relationship of literature and art.
Now The Age of Fable, the first section of the Mythology, is available in this inexpensive, highly readable edition. Drawing on the works of Homer, Ovid, Virgil, and other classical authors, as well as an immense trove of stories about the Norse gods and heroes, The Age of Fable offers lively retellings of the myths of the Greek and Roman gods: Venus and Adonis, Jupiter and Juno, Daphne and Apollo, and many others.

Thomas Bulfinch (July 15, 1796 – May 27, 1867) was an American writer, born in Newton, Massachusetts. Bulfinch belonged to a well educated Bostonian merchant family of modest means. His father was Charles Bulfinch, the architect of the Massachusetts State House in Boston and parts of the U.S. Capitol in Washington, D.C.. Bulfinch supported himself through his position at the Merchants' Bank of Boston.

1. Bulfinch's Mythology: the Age of Fable

3. Bulfinchapos;s Mythology: the Age of Fable