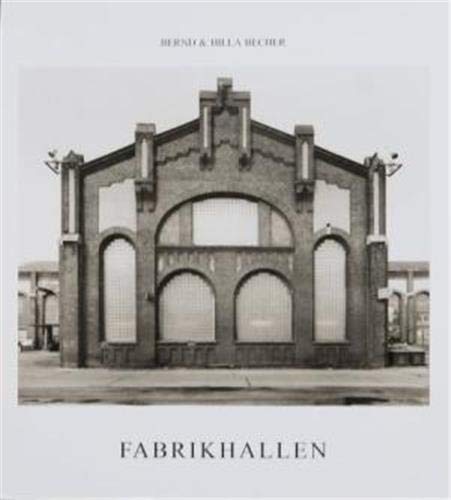 Book Description Munich, Germany: Schirmer/Mosel, 1994. Hardcover. Condition: Fine. Dust Jacket Condition: Fine. 1st Edition. 1st Printing. Signed. 276 pages. Published in 1994. Collection of architectural photographs. The First Hardcover Edition. Precedes and should not be confused with all other subsequent editions, particularly the Softcover Edition. Published in a small and limited first print run as a hardcover original only. The First Edition is now rare. An austerely elegant production by Bernd and Hilla Becher: Oversize-volume format. Black cloth boards with pale gray titles embossed on spine, as issued. Photographs by Bernd and Hilla Becher. Brief Introduction by Klaus Bussmann. Printed on pristine-white, thick coated stock paper in Munich, Germany to the highest standards. In pictorial DJ with titles on the cover and spine, as issued. Presents Bernd and Hilla Becher's "Fabrikhallen". Factory Buildings and Industrial Facades. Photographed in the most rigorous, taxonomic, and severely beautiful manner. "Vastly influenced the international photography world within the past few decades. Their unique genre of photography is somewhere between topological documentation and art, lining up with the aesthetics of the Neue Sachlichkeit Movement of the 1920's of Karl Blossfeldt, August Sander, and Albert Renger-Patzsch" (Publisher's blurb). As the founders of the "Becher School" (AKA "Dusseldorf School"), they have, in turn, influenced several generations of documentary photographers and artists who have themselves become international superstars: Andreas Gursky, Thomas Ruff, Thomas Struth, Candida Hofer, Axel Hutte, Elger Esser, and even the Canadian photographer Edward Burtynsky. "They shot only on overcast days so as to avoid shadows, and early in the morning during the seasons of Spring and Fall. At each site, the Bechers created landscape views of the entire plant, which set the structures in their context and showed how they relate to one another" (Philip Gefter). The Bechers did not invent the grid (Mondrian did). But it is the origin and basis of their aesthetic and practice. The Grid remains the most advanced iconography of Modernism. It is THE aesthetic, finally, of purity, of emotional self-regulation, the postponement of instant gratification in exchange for lasting aesthetic reward. Surely, no one (or duo) has pursued this single-minded aesthetic to its logical conclusion in photography as single-mindedly as the Bechers did. An absolute "must-have" title for Bernd and Hilla Becher collectors. This copy is very prominently, neatly, and beautifully signed in pencil on the front free endpaper by Bernd and Hilla Becher. It is signed directly on the page itself, not on a tipped-in page. This title is a great art photography book. This is one of few such double-signed copies of the First Hardcover Edition/First Printing still available online and is in especially fine condition: Clean, crisp, and bright, a pristine beauty. Please note: Copies available online command as much as $600 even though they have serious flaws. This is surely an accessible and lovely alternative. A rare signed copy thus. 264 plates. Winners of the Erasmus Prize, the most prestigious European artistic prize, in 2002. Winners of the Hasselblad Award, the most prestigious photography award, in 2004. Two of the most important and influential photographers of the 20th century. A fine collectible copy. (SEE ALSO OTHER BERND AND HILLA BECHER TITLES IN OUR CATALOG) ISBN 3888147301. Signed by Author. Seller Inventory # 21519