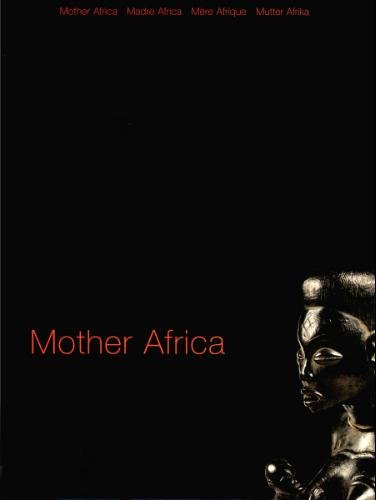 Catalog to the exhibtion Mother Africa/Madre Africa/Mère Afrique/Mutter Afrika at the Schomburg Center for Research in Black Culture, New York Public Library (December 2001- March 2002), the Centro Conde Duque, Madrid and two Canary Islands venues (Tenerife & La Regenta, Grand Canary) Spain (2004), and Museo Del Hombre Domincano, Santo Domingo, Domincan Republic (2007). Includes essays by noted scholars of African art and the Diaspora and poems in English, Spanish, French and German, and images by Manu Sassoonian of 50 sculptures highlighting the role of mothers and motherhood in traditional African societies. Essays: Mother in West Africa / George N. Preston; Whose mother? / Stefan Eisenhofer; Fertile Mothers - fertile concepts / Manuel A. Jordan; East Africa / Armand Duchâteau; Three faces of Afro-Cuban motherhood / Rogelio Martinez Furé. From the website of the New York Public Library: "From the earliest sculpture of sub-Saharan Africa through the 20th century, one of the most dominant and recurring themes is that of the mother and child. These sculptures generally portray the mother as a nurturing presence, a symbol of strength and a source of power. Despite the fact that African peoples share a common respect for the relationship between mother and child, representation of that relationship has varied significantly among Africa's diverse cultures and religions. The exhibition Mother Africa: Masterpieces of African Art celebrates that diversity with the presentation of 50 unique sculptures selected primarily from the collection of Reynold C. Kerr."