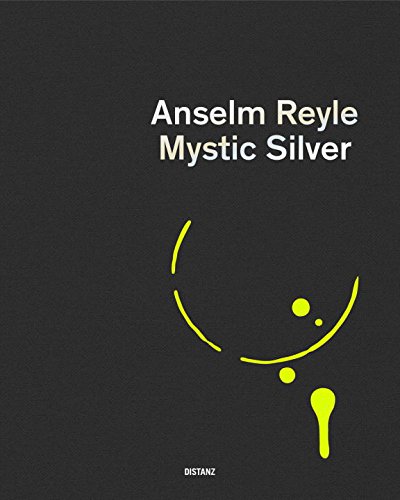 ""I draw on modernism as a vocabulary," Anselm Reyle (b. Tübingen, 1970; lives and works in Berlin) says. For his reliefs, pictures, and sculptures, he uses materials such as PVC film, acrylic, mirrors, or concrete. He experiments with automotive paint, putty, LED lights, and African sculptures. Reyle already engaged with abstraction and formalism when the art market was still clamoring for figurative painting. Working with everyday materials and contemporary associations, he gives fresh impetus to themes modernism was thought to have dispensed with. An ongoing concern in his work is the questionable status of effects and decorative elements. "Mystic Silver" offers a comprehensive panorama of ca. 80 selected works representing various divisions of his oeuvre from the past several years. The book explains interconnections—as well as ties to other artists—and illustrates that Reyle doesn’t see a contradiction between glossy finish and trash, between luxury and found objects. His gaudily colorful art, which deliberately oversteps boundaries of good taste, has earned him a reputation as the art scene’s heavy metal star. Patrons who have bought his art include not only prominent art collectors, but also Hollywood stars and fashion designers.
With essays by David Ebony and Dirk Luckow and a conversation between Friedrich von Borries and Anselm Reyle."

Book Description Gestalten, 2013. Condition: Good. A+ Customer service! Satisfaction Guaranteed! Book is in Used-Good condition. Pages and cover are clean and intact. Used items may not include supplementary materials such as CDs or access codes. May show signs of minor shelf wear and contain limited notes and highlighting. Seller Inventory # 3942405180-2-4

Book Description Gestalten, 2013. Hardcover. Condition: VERY GOOD. Pages are intact and are not marred by notes or highlighting, but may contain a neat previous owner name. The spine remains undamaged. Seller Inventory # 3942405180_abe_vg

Book Description Gestalten 2013-07-08, 2013. Hardcover. Condition: Good. Item is in good condition. Some moderate creases and wear. This item may not come with CDs or additional parts including access codes for textbooks. Might be an ex-library copy and contain writing/highlighting. Seller Inventory # DS-3942405180-3