Items related to What Is Japanese Architecture?

What Is Japanese Architecture?

What Is Japanese Architecture? 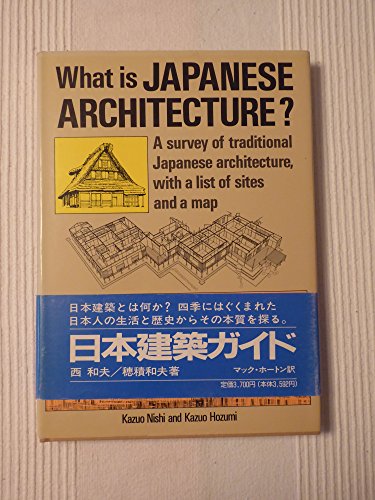 Traces the development of the traditional styles of the architecture of Japanese houses, theaters, teahouses, castles, Buddhist temples, and Shinto shrines

KAZUO NISHI (b. 1938) graduated from Waseda University in 1962 and received his doctorate from the Tokyo Institute of Technology in 1967. He is currently professor of engineering at Kanagawa University. Among his publications in Japanese are A Study of Methods of Architectural Estimation in Early Modirn Japan, Carpenters in the Edo Period, and Himeji and Edo Castles.

KAZUO HOZUMI (b. 1930) graduated in architecture from Tohoku University. A freelance illustrator, he has published numerous books in Japanese, including Illustrations of Cars, Horyuji Temple, The Great Buddha of Nara, and The Town of Edo.