Items related to The Book of Tea: The Classic Work on the Japanese Tea...

Kakuzo Okakura The Book of Tea: The Classic Work on the Japanese Tea Ceremony and the Value of Beauty

The Book of Tea: The Classic Work on the Japanese Tea Ceremony and the Value of Beauty 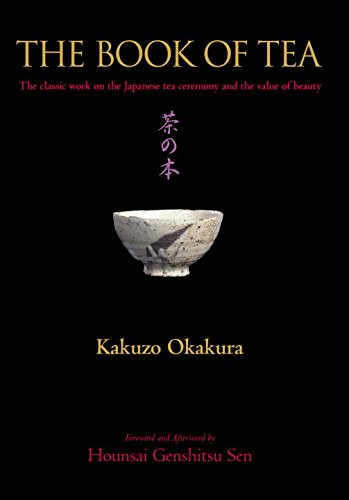 The Book of Tea has served for more than a century as one of the most perceptive introductions to Asian life and thought in English. Publication of the book was a pioneering effort in the cultural bridge-building between East and West. Kakuzo Okakura perceived chanoyu-literally, "the way of tea"-as a form of spiritual culture, a disipline that transforms itself into the Art of Life.

In writing of chanoyu, his concern was the broad current of Asian culture flowing eastward from India, and its potential contribution to the culture of all humankind. Buddhism, Taoism, Zen, and Chinese and Japanese aesthetics are discussed, giving voice to traditional Asian values and ideals that had been little recognized in the West. Thus, he sought to convey the spirit of chanoyu as a crystallization of the cultural life of the East.

That a nation should construct one of its most resonant national ceremonies round a cup of tea will surely strike a chord of sympathy with at least some readers of this review. To many foreigners, nothing is so quintessentially Japanese as the tea ceremony--more properly, "the way of tea"--with its austerity, its extravagantly minimalist stylization, and its concentration of extreme subtleties of meaning into the simplest of actions. The Book of Tea is something of a curiosity: written in English by a Japanese scholar (and issued here in bilingual form), it was first published in 1906, in the wake of the naval victory over Russia with which Japan asserted its rapidly acquired status as a world-class military power. It was a peak moment of Westernization within Japan. Clearly, behind the publication was an agenda, or at least a mission to explain. Around its account of the ceremony, The Book of Tea folds an explication of the philosophy, first Taoist, later Zen Buddhist, that informs its oblique celebration of simplicity and directness--what Okakura calls, in a telling phrase, "moral geometry." And the ceremony itself? Its greatest practitioners have always been philosophers, but also artists, connoisseurs, collectors, gardeners, calligraphers, gourmets, flower arrangers. The greatest of them, Sen Rikyu, left a teasingly, maddeningly simple set of rules:

Make a delicious bowl of tea; lay the charcoal so that it heats the water; arrange the flowers as they are in the field; in summer suggest coolness; in winter, warmth; do everything ahead of time; prepare for rain; and give those with whom you find yourself every consideration.

A disciple remarked that this seemed elementary. Rikyu replied, "Then if you can host a tea gathering without deviating from any of the rules I have just stated, I will become your disciple." A Zen reply. Fascinating. --Robin Davidson, Amazon.co.uk From the Inside Flap:

This modern classic invites the reader to discover a unique tradition that has come to symbolize the wisdom, beauty, and the elegant simplicity of Asian culture. The author celebrates the Way of Tea from its ancient origins in Chinese Taoism to its culmination in the Zen discipline known as the Japanese tea ceremony-an enchanting practice bringing together such arts as architecture, pottery, and flower arranging to create an experience that delights the senses, calms the mind, and refreshes the spirit. Tea was first used as a medicine and an alchemical elixir by the ancient Chinese Taoists, who praised its spiritual powers. Buddhist monks made drinking tea part of a tradition honoring the founder of Zen; this ritual was later refined in the performance of the Japanese tea ceremony as a meditative practice. "The Book of Tea describes the rich aesthetic of Asian culture through the history, philosophy, and practice of brewing and drinking tea.
This edition contains an introduction by Sam Hamill that provides historical insight into the significance of the tea ceremony within Zen Buddhism.

1. The Book of Tea: The Classic Work on the Japanese Tea Ceremony and the Value of Beauty

2. THE BOOK OF TEA: THE CLASSIC WOR