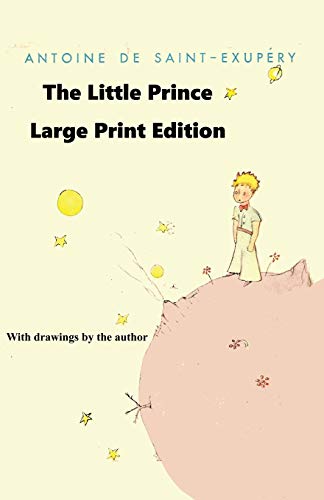 The Little Prince is one of the most famous books ever written. It is said to have been translated into 300 languages and dialects. The original in French has also been reprinted by Ishi Press as Le Petit Prince - grande édition imprimée ISBN 4871879275 It was first published by Reynal & Hitchcock, New York, 1943. Copies of the first edition are rare and will sell for more than one thousand dollars. Here we have used for this reprint the original translation by Katherine Woods. There are at least six other published English Language translations and so many translations in other languages that it is difficult to count them. For example, there are said to be 70 translations into Chinese. The book was written in French. The English translation was dictated by the publisher. The Little Prince describes his travels to ten planets. The other little planets are asteroids that circle the Sun between Mars and Jupiter. The asteroids have numbers rather than names. The Little Prince lives on one of these asteroids and visits the others. It appears to be similar to and a predecessor of the “Star Treck” TV series involving a space ship that goes from one planet to another finding different life forms and new adventures on each planet.

He wrote this book during two years in New York. Shortly after completing this work, the author flew back to Europe to rejoin the Free French Air Force fighting in World War II. He was an experienced pilot who had flown all over the world. However, the following year in July 1944 he was shot down by the Germans and killed. As he was born in 1900, he was 44 years old when he was shot down. He was too old to be flying in combat and his comrades were blamed for his death as they should not have allowed him to fly. However, the other pilots said that he had insisted on flying and they lacked the power to stop him. Prior to the war, Saint-Exupery had achieved fame in France as an aviator. The Little Prince posthumously boosted his stature to national hero status in France. He earned further widespread recognition with international translations of his other works. His 1939 philosophical memoir Terre des hommes—Man and His World became the name of an international humanitarian group. He wrote many other books, most of them published posthumously. On 30 December 1935, at 2:45 a.m., after 19 hours and 44 minutes in the air, when flying from Spain to Siagon in French Indo-China, now known as Saigon, his airplane crashed into the Sahara Desert in Africa. He was far out in the desert and lacking in water, so he was in danger of dying of thirst. Fortunately, after four days of walking, a passing camel driver found him and rescued him. This incident seems to form the basis of this book, because here he crashes into the desert and is trying to fix his airplane before he dies of thirst, when the Little Prince appears before him.

Shipping: US$ 12.26
From United Kingdom to U.S.A.
Destination, rates & speeds