Deciding the Public Good: Governance and Civil Society in Japan 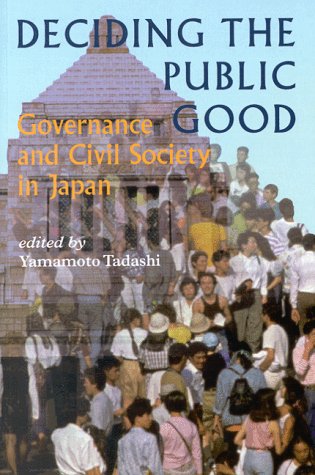 The intense and extensive globalization process occurring worldwide and the concurrent pluralization of society have weakened the role of the state in managing its own society, as well as its external relationships. Recognizing the dramatic growth of civil society around the world and the critical role it is playing in filling the space left by the state, the authors, longtime observers of the nature of Japanese governance, examine the role of civil society in the governance of Japanese society. The authors analyze in the Japanese context such questions as how civil society responds to new challenges of governance, what are its comparative advantages and limitations, how it interacts with other sectors such as bureaucracy and the corporate community, and what is required to strengthen civil society in Japan. Individual chapters address such issues as the Japanese perspective on "public," the prospects for the development of individualism in Japan, citizen participation in the political process, the emergence of civil society, the role of track two and other nongovernmental efforts in Japan's external relations, and a historical review of the role of bureacracy.

Yamamoto Tadashi is the founder and president of the Japan Center for International Exchange. He also serves as the director of the Pacific Asia regional group of the Trilateral Commission.

Book Description Paperback. Condition: New. 1999 Softcover Edition Published by JCIE - Quality Books. Because We Care - Shipped from Canada. Usually ships within 1-2 business days. If you buy this book from us, we will donate a book to a local school. We donate 10,000+ books to local schools every year. Seller Inventory # R06507M

3. Deciding the Public Good: Governance and Civil Society in Japan